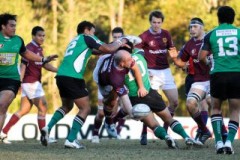 Minor Premiers University claimed both The Caxton Cup and Welsby Cup for 2010 in defeating second placed Sunnybank 31-12 at Oldmac Oval at the weekend.

Uni have gained a confidence boost ahead of next Sunday’s return bout in the Queensland Premier Rugby Major Semi-Final at Ballymore.

Wallaby hooker Stephen Moore further bolstered an already strong University side, which proved too good for a Sunnybank missing several of its own representative stars.

University Coach Mick Heenan made special mention of Moore’s contribution to a dominant first half by the students’ pack, which also boasted other representative players in James Hanson, Laurie Weeks and Mitchell Chapman.

“Stephen was good today… he brings a professional approach to our game,” Heenan said.

University’s dominance up front and at the breakdown provided plenty of space for flyhalf Ian Prior to feed the students’ pacy outside backs, resulting in tries to Tim Buchanan and David Burns in the 22nd and 27th minutes.

“You need to win the ball at the breakdown and against these big teams in these big matches and that’s what we wanted to do early. I thought we performed really well today,” Heenan said.

Sualauvi Lilomaiava was the shining light for the Sunnybank forward pack with some punishing defence and hard running, but he needed more support.

The second half gave no relief to the Dragons who conceded two more tries before a late rally produced tries to Brendon Underwood and Richard Kingi. 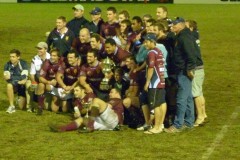 University are the Caxton and Welsby Cup Winners for 2010. Photo: Clare Hunter.

Sunnybank Assistant Coach Tim Sampson said the Dragons were hoping to field a stronger side next Sunday in the Ballymore rematch, where the winner goes straight through to the Grand Final and the loser has to face either Brothers or Sunshine Coast in the Preliminary Final a week later.

“We created the opportunities so we are happy with that… three extra players next week will make the difference,” Sampson said.

As the winner of The Caxton Cup in the final round, University are declared the official winners for 2010.