Organisers of Brisbane’s Walk Against Warming have called on the Labor party to make a clear policy in regard to climate change.

Around 8,000 protesters walked backwards at King George Square in the city on  Sunday, August 15, with Toby Hutcheon, the executive director of the Queensland Conservation Council, saying the rally represented Australia’s politicians attitude to climate change.

“We have a situation where two of [the] major [political] parties don’t have a price on carbon pollution as a key part of their climate change – they’re going backwards,” Mr Hutcheon said at the event.

Colman Ridge, executive director of Greensfest, said one of the main points of the event was to encourage political parties to use the democratic vote to get a mandate from the Australian people.

“One of the main calls to action on stage [is] for all parties to provide a policy [on carbon tax] that people can vote for,” he said.

“We have no idea how the Prime Minister thinks a focus group of 150 people provides a greater census than an entire election.”

Mr Ridge says while the Liberal party and the Greens have made their policies regarding carbon tax clear, the Labor party has not put forward a clear policy.

“[Federal Opposition Leader] Tony Abbott and [Greens leader] Bob Brown are actually putting out there what they believe – ‘I don’t want a carbon tax’ or ‘I do’,” he said.

“The most pathetic position in the election is the Labor Party – ‘this is what we believe, but we won’t put a policy on it until after the election’.”

Steven Miles, Labor candidate for the Brisbane seat of Ryan, says the Labor Party is committed to action on climate change. 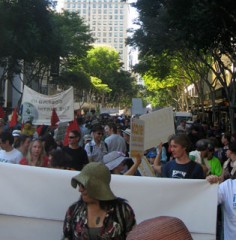 “Labor is the only major party that remains committed to doing what it will take to [bring] Australia’s emissions down,” he said.

“That means putting a cap on our pollution and forcing polluters to pay for the carbon that they emit.”

He said the reason the policies had not gone ahead was because the Liberal party would not allow them to pass in Federal Parliament.

“We’d have those [policies] in place right now if not for the Liberals and Tony Abbott in particular [who] voted against the wishes of the Australian people and against the mandate that both Labor, and the Liberals under [former prime minister] John Howard, had from the last election,” he said.