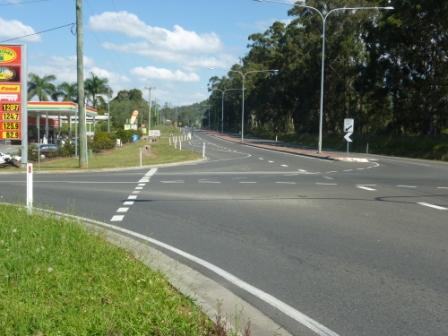 The speed limit on a notorious stretch of Steve Irwin Way on the Sunshine Coast will be reduced in order to protect motorists.

Several hundred metres either side of the Bowen Road intersection in Glasshouse Mountains will be decreased to 80 km/h.

“A lot of people have raised significant concern given the number of residents who live down Bowen Road and the fact that there are residents more broadly in the hinterland who use the road as an access to the Bruce Highway,” Mr Powell said.

“It’s just one of those intersections where you’re taking your life in your hands every time you come out of it.”

Mr Powell is frustrated that despite months of community lobbying, fatality rates are the primary reason Main Roads supported the reduction.

“I’d rather the government err on the sign of caution and save lives than wait until lives were lost before decisions like this can be made,” he said.

Employees at the Glasshouse Mountains Matilda service station, located on the corner of Bowen Road and Steve Irwin Way, welcomed the decision.

Frank Kutra, an employee at the Matilda service station, says the intersection is dangerous and the speed limit should have been reduced when the road was upgraded.

“We have had staff members who have had accidents there and [there] have been numerous accidents and close calls from people turning out of Bowen Road toward Beerwah,” Mr Kutra said.

“I think the reduction is a very good idea… people plant their foot as soon as they see the 100 [km/h] sign and don’t realise there’s a turning lane further up.”

The new 80 km/h signs will be erected shortly and will take effect immediately.