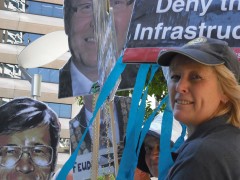 Jan Pukallus, the Citizens Electoral Council (CEC) candidate in the former Prime Minister’s Brisbane electorate, said regardless of the activities she and her party organise, reporters don’t report them.

“We don’t get fair representation. This is the first interview I’ve had and it’s a few days before the election,” she said.

Academic: Some parties deserve to be excluded

Senior lecturer in politics from the University of Wollongong, Dr Anthony Ashbolt, said minor parties should be represented in the media according to their political base in the community.

“The CEC doesn’t have enough support out there. The Greens do have the following but don’t get adequate coverage,” he said.

The CEC said they have thousands of supporters around the country.

“The CEC attempts to influence politics to the right wing. I think it’s fair for the media to ignore them – the CEC hold conspiracy theories,” Dr Ashbolt said. 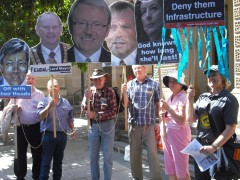 CEC: Censored by the ABC

The CEC said they were deliberately excluded from the ABC’s Q&A audience in the program’s population debate last week.

“You’d think they’d have a variety of opinions … they didn’t want any surprises,” Ms Pukallus said.

An ABC spokesperson said the Q&A audience was drawn from people who had registered to join the discussion prior to the federal election announcement to avoid political party stacking.

Jim Hazzard from the CEC said journalists don’t cover their activities because they are afraid to stand up for the truth.

“It’s about stopping the little man from getting ideas about prosperity. We’re about optimism, providing productive jobs for all Australians for a higher standard of living. The sustainable population concept means genocide,” he said.