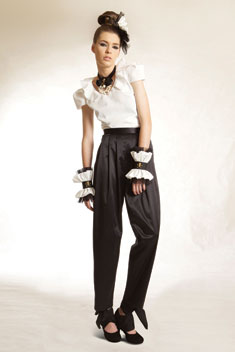 The economic downturn is continuing to shift the future of fashion as customers cut back on spending with tighter budgets.

“Consumers will continue to be more considered and cautious in their buying habits in the future,” he said.

“It’s the middle and higher market brands – not prestige – that have really been struggling in the last 18-months to two-years.”

“I find orders have dropped down and a lot of things have changed … also people’s perceptions,” he said.

“With the big giants, everything goes on sale.

“Those constant sales have been teaching consumers not to buy anything at full price.

“So instead they wait until it goes on sale.”

Mr Wu has also noticed a change in attitude towards seasonal fashion.

“People definitely are starting to look into things they can wear as multifunctional to justify the spending,” he said.

“They want things that can translate into different times – winter and summer – and also things that won’t date even after a few years.

“People are looking for extra value, so rather than cutting costs, I’m changing design direction to suit what they’re looking for.”

‘Not as much bling’

“You can even see with the designers, there’s not as much ‘bling’,” she said.

“They went more towards the classic look that would last a long way.”

Ms Grbac says designers are also “working with diffusion lines more, away from the luxury brands, to still get their sales”.

“That’s how people are coping,” she said.

“I brought out a diffusion line myself, which brings the prices down so people can afford it and don’t go without.”

Designer Lisa Chedanne says she has not felt the impact so much with her new clothing line Lilya, but “a lot of stores are saying it’s quiet”.

“I have even seen factories struggling by not being paid by designers, and designers getting paid really late by some stores,” she said.

“With spring-summer coming up and our location, with people moving into the area, and so much fashion taking place, one would have to think there’ll be an increase in retail sales,” he said.

But Mr Kulmar said consumers will learn from the economic downturn.

“When this trend started about two years ago, there were some people who said, ‘it’s okay, it’ll go back to where it was’,” he said.