Last Friday’s Cromwell Bunker party was attended by more than 2,000 people, making it one of the biggest college parties in Australia.

With these massive crowds of students attending each year, and the recent revelations of the chauvinistic, ‘pro-rape’ culture of some University of Sydney colleges, there are concerns about similar sexist trends developing in Brisbane colleges. 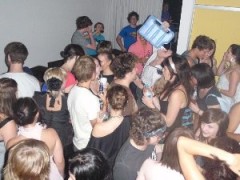 University college parties can often get out of control. Source: Tara Bosworth

“Obviously it’s been an issue in colleges in the past, that women have been sexually harassed,” she said. “The organisers need to be very clear on what policy positions they hold when it comes to that sort of inappropriate behaviour.”

The main organiser of the event, social co-ordinator for Cromwell’s Student Association, Jacob Landers said the Bunkers are all about having a good time.

He disagreed with the notion that colleges are sexist or unsafe for women.

“There was one isolated incident that happened at one college in Sydney and it’s been blown out of proportion a bit,” Mr Landers said.

University of Queensland (UQ) student, Alice Peterson, has been happily living at the co-educational St John’s College for three years and said she has never felt unsafe.

“The Bunker parties have always been a lot of fun for me,” she said. “They have a great, fun atmosphere.”

“It’s a very different way of life, it’s very cliquey and it’s all about going out every night,” she said.

Ms Philips said the chauvinistic attitude is exaggerated at Bunker parties because of the huge crowds and the dress-up themes.

“It’s not until you leave [college] that you realise how sexist the things that were going on were,” she said. “But at the time that’s your role, you’re a Women’s College girl and the King’s [College] boys are allowed to hit on you or do stuff.”

Ms Drakeford from the National Union of Students suggested the organisers should devise a strategy, to ensure women feel safe in such environments.

“They need to have potential punishments laid out for inappropriate behaviour before each party starts,” she said.

“If there’s someone doing something that they shouldn’t be doing, they are immediately kicked out of the event,” Mr Landers said.