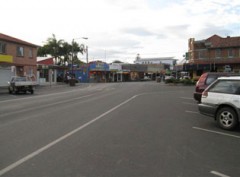 Many businesses at Byron Bay on the northern New South Wales coast say they are struggling to survive this winter without the tourism spike Splendour in the Grass usually provides.

The music festival’s move to Woodford, north of Brisbane in south-east Queensland, this year has left Byron Bay without the 17,500 people and around $6 million that Splendour attracted in 2009.

“It affects the whole cash-flow of Byron business,” he said.

“In the winter in Byron, sales drop to the point where companies are breaking even and suppliers can’t be paid.

“Splendour weekend was a big hit of cash they could use to pay their suppliers … and help see them through the quiet times into profit again.”

Mr Ahern says the Splendour weekend was akin to Easter and Christmas in terms of profit for Byron businesses.

“It was a spike in a very quiet period,” he said.

“I would love it to return to Byron in the future.” 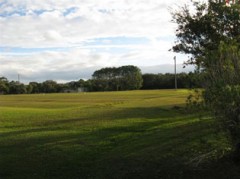 Belongil Fields is one of the many Byron businesses suffering from Splendour's move north. Source: Dominique Wiehahn

David Rowley, on-site manager of previous Splendour site at Belongil Fields, also says he would like Splendour back.

“It would be really good if it came back to Byron,” he said.

Mr Rowley says business has been very slow this winter in comparison to previous Splendour years when the site was filled to capacity.

“Belongil fields has been hugely affected by the move, but then which business hasn’t?” he said.

“The number of people coming to the visitor centre dropped 15 per cent this July from what it was last year,” she said.

Ms Myers says this drop reflects a drop in tourism which she believes is connected to Splendour’s move.

“Splendour is normally the busiest time in the winter period,” she said.

“The move has affected everybody – people aren’t coming here for the festival so that’s money that hasn’t been earned.”

“People forget that business in Byron is seasonal,” he said.

“We hold extra staff through the winter for the summer period.

“Without Splendour we cant’ afford to keep these staff on.”

Mr Pearson says numerous staff who left this winter have not been replaced.

He is hoping the festival will return so future regular cuts will not be necessary.

“If Splendour does not to return to Byron in the future, we will have to get used to dismissing staff in the winter,” he said.

“We definitely want it to back.”

‘Out of council’s hands’

Byron Shire Mayor Jan Barham says she is aware some local businesses have felt the affect of the loss of Splendour.

However, Mayor Barham says the move was not a council decision and neither is the return.

“Whether Splendour returns to Byron or not, is out of Council’s hands,” she said.

“The decision now sits with the New South Wales  Department of Planning.”

Mr Ahern is urging the State Government to consider Splendour’s beneficial impact on Byron Bay in the decision-making process.

“We encourage the State Government to think carefully about approving a permanent site for music and culture … we believe they definitely should approve it,” he said.