A Coolum actor’s mid show collapse left audience members in shock on the closing night of a local theatre production.

Comedies on a Platter was heading into its third short play for the evening when the real life drama unfolded.

“He was about to shake the hand of the other actor and he looked nervous,” Ms Baker said. 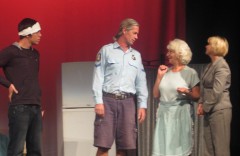 “Then his legs started to wobble and he fell to the ground.”

“I could see he was as white as a ghost and knew something wasn’t right.”

Fellow theatre patron, Steve MacDonald, said he and many other audience members didn’t realise anything was wrong until the curtain closed.

“We were all laughing at what was going on with the actor because we thought it was part of the show,” Mr MacDonald said.

“Once we knew he had actually fainted, I felt horrible for having laughed.”

Fellow actor, Kathryn Rose, said she had previously seen the play but like audience members thought it was all part of the act.

“Bruce often changes things to what he thinks will work with that night’s audience,” Ms Rose said.

“That’s what I thought he was doing and I was laughing along with everyone else.”

Mr Olive was taken to hospital and kept in overnight for observation.

“Bruce has been diagnosed with a hernia,” Ms Rose said.

“It is unclear whether he needs surgery but we think it was caused by moving the heavy props from the first play, Ladders.”

Ms Rose said the cast and crew were shaken up by the incident.

“We were all very concerned for Bruce’s welfare.”

Ms Baker said she was disappointed her evening was cut short.

“I wanted to see that play in particular because I’d heard really good things about it from my friends,” Ms Baker said.

“Though, in saying that the most important thing is the actor’s health.”

Theatre patrons will have another opportunity to see Comedies on a Platter at the Sunshine Coast Theatre Festival where Mr Olive is expected to perform.