While mainstream media maintains a close eye over the upcoming election, one non-profit organisation is offering a different perspective to help young people get involved in politics.

Electionwire is a creative online hub which allows young Australians to post any election-related material such as news stories, videos, interviews or even comedy.

The idea is the brainchild of Vibewire, a Sydney based youth organisation which normally allows youth to contribute any creative work to their website, including creative writing, journalism and art.

Electionwire offers broad and unique coverage, with 14 selected young reporters covering issues ranging from mental health, climate change and even an interview with the leader of the Australian Sex Party.

The site started in 2009 but has considerably expanded in the last month as the election draws closer.

There are already more than 50 videos on a range of subjects.

Young Australians aged 20-24 represent 8 per cent of the population, a significant proportion of Australian voters.

“In my experience, young people often feel left out of the political process, and feel as though some of the major issues that affect them are skimmed over,” Ms Cavalier said. 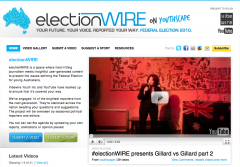 While Vibewire has designated 14 young reporters, anybody can contribute.

“It allows us to have coverage on issues that normally might not be covered…which is important,” Ms Cavalier said.

“In my experience, younger people are more engaged and passionate than many other voters,” Miles said.

He says the use of popular social networking sites and platforms such as Electionwire has ushered in a new era of political communication.

“All campaigning is like a conversation. You need to be visible and engage with a lot of people. Facebook, Twitter, Blogging, are all very similar, they allow us to communicate with the public, just differently, “Miles said.