Brisbane’s burgeoning fashion scene shows no sign of slowing down as it just wrapped up its annual Mercedes-Benz Fashion Festival which has been dubbed its most successful to date. 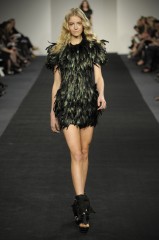 The festival, now into its fifth year, has positioned itself as Queensland’s most prestigious fashion event and has undergone a host of changes to cater for Brisbane’s increasing drive and demand for fashion and fashion events.

Styling director of MBFF, Liz Golding, says one of the biggest changes she has noticed since its establishment in 2005 is the respect and recognition it has finally gained from interstate counterparts such as Sydney and Melbourne.

The southern rivals have long made their mark on Australia’s fashion map, with prominent and celebrated events including Sydney’s Rosemount Australian Fashion week.

“There’s a greater respect from interstate for our festival, this comes from the public, the well known designers, the young designers, the other fashion weeks and fashion publications. I find that everyone is aware of MBFF now. I talk with the majority of the designers and the PR people to build the program and they are all interested in the event,” Golding says.

Ms Golding also credits the festivals increasing popularity to Brisbane’s interest and involvement in all aspects of the fashion industry.

“The media and the popular culture have had an influence on the drive for fashion. The QUT and TAFE courses are helpful in developing the youth interest in fashion. The public is more aware of the diversity of fashion available for purchase, it is more accessible.”

Last year’s festival saw a 33 per cent ease in attendance to that of the previous year.

To cater for the increased demand for tickets, this year’s festival took place in the South Bank Cultural Forecourt in a purpose built marquee measuring 60m x 15m complete with tiered seating and a 30m runway.

Festival director Lindsay Bennett says MBFF has helped Brisbane to establish and cement itself on the Australian fashion map.

“Brisbane is fast becoming Australia’s ‘new world city’ and this is evident in the numbers of guests who are now coming to our city to see successful fashion and cultural events like the Mercedes Benz Fashion Festival,” Bennett says.