Queensland buses are “uncontrollable” and “unpredictable” a Translink spokesperson said, after a bus malfunction leaves a passenger trapped and engulfed by smoke.

43-year-old passenger Jennifer Teate, feared for her life, believing the bus was on fire.

“I didn’t know where the fire was but there was just smoke everywhere,” she said.

“I ran to the closest door, at the back, but it wouldn’t open.

“It was only when the bus driver yelled to get my attention, that I realised I could get out the front.”

The driver Peter Ronchese, said malfunctions with the buses are common.

“It blew a turbo, that’s what caused all the smoke, it happens all the time with these buses,” Mr Ronchese said.

“All I could do was call for help, and wait for it to arrive.”

A spokesperson for Translink said this was not an isolated incident.

“Breakdowns are a natural occurrence, with extreme heat or cold, being stuck in traffic, the buses can overheat,” he said.

“It’s really variable, we simply have procedures in place so that we can get replacement buses out as fast as possible.”

However, Ms Teate believes these procedures are outdated and dangerous.

“If they know their busses are going to overheat they shouldn’t be allowed on the road, ” she said.

“They can’t simply send out a replacement and think everything is fine, it’s unsafe and neglectful.”

Commuters were also affected, the smoke from the bus creating a visual obstacle.

20-year-old Kerry-Anne Dale, who was following behind the bus, said she could not see where she was driving.

“The smoke totally blocked my vision, I had to slam on the brakes,” she said.

“Traffic completely stopped, waiting for the one bus to get off the road.”

A tow truck arrived an hour after the incident to tow the bus to the Virginia Bus Depot Garage, to be fixed before being put into service again. 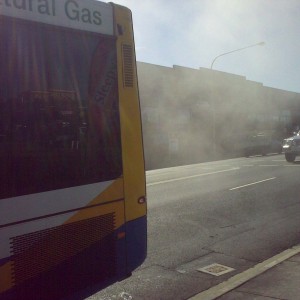 Bus releases smoke into the street 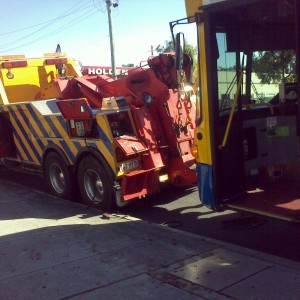 335 bus being towed from the scene