Bullets could rebound for 2011 NBL season 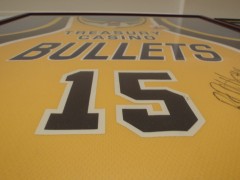 The Bullets logo could be seen back on the court for the 2011-2012 NBL season. (Source: Tom Kojrowicz)

The former championship team-mates attended a meeting at Carina Leagues Club on August 11 overseen by NBL boss Chuck Harmison that sought to create a committee to organise the return of the Bullets.

Brisbane, one of the league’s foundation clubs, last took the court in 2008 but folded due to financial difficulties.

The committee will prepare a five-year plan to present to the wider community, government and local councils with the aim of seeing the Bullets return in 2011.

One proposal floated was to have the team play out of the Chandler Sports Centre, rather than its former home court at the Brisbane Convention Centre.

Sengstock is confident that recent changes to the NBL’s structure, including the return of the Sydney Kings for the 2010-2011 season, act as a prelude to bringing Brisbane back into the league.

“One of the things we had to do last season was get the finances under control,” he said.

“We brought everything back to the ability that clubs become sustainable and are in there for the long term.

“We worked very, very hard and got a team in Sydney for the 2010-2011 season. We’re very comfortable that it will be successful this year and help the whole league to make that big step.”

While the move has gained the support of Basketball Australia and Basketball Queensland, the idea to re-introduce the club was that of former Brisbane legend Loggins.

Loggins, who played 19 seasons for the Bullets, said resurrecting the once-proud franchise is not just a personal dream, but a community vision.

“This isn’t just about me. This is about trying to bring a professional team back to Brisbane,” he said.

“We’re all on the same page. We all have passion. I’m no different to you – I have the same passion you have, the only difference is that I’ve scored about 10,000 points… and a little bit more.”

With spirits high and smiles on all faces, Loggins once again ensured the motives for bringing the league back were purely communal.

“I had this vision that somebody had to do something about it,” he said.

“We’re looking for everyone to come together,” he said.

“It is very important in my view that we get basketball united with the business community and others who have the desire to see Brisbane represented back into the NBL.”