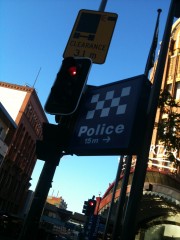 Civil libertarians are slamming new laws which will allow police to issue on-the-spot fines for swearing.

The new laws, which are on target for an early 2011 rollout across Queensland, give police the power to issue $100 fines to those who swear in public.

It will mean offenders won’t have to go to court, but President of the Queensland Council for Civil Liberties, Michael Cope, believes the new laws will be detrimental to Queenslanders.

“We’re opposed to them because it gives far too much discretion to police officers,” he said.

“The basic problem with [the fines] is this is the sort of thing the police will be doing whenever they decide they don’t like somebody… It’s ripe for abuse.”

“Police have a zero-tolerance approach… Everybody has the right to feel safe and to enjoy public space.”

Townsville Magistrate Peter Smid earlier this month ruled in favour of defendant Bardon Kaitira, who was accused of swearing at an on-duty police officer.

Magistrate Smid said the defendant’s actions did not interfere with those around him and his swearing did not constitute a public nuisance.

Mr Roberts said the ruling would not deter police from issuing fines or arresting people acting inappropriately in a public place.

“The ruling does not mean another alleged offender charged for engaging in similar behaviour at a different time or place will escape punishment,” he said.

“Another Magistrate assessing all the facts… may find an alleged offender guilty.”

Mr Kaitira had been told by police he could either pay a fine or be placed under arrest.