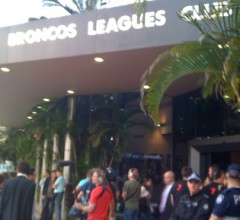 Around 200 people attended the public forum fronted by Ms Gillard and Mr Abbott in Brisbane.

Prime Minister Julia Gillard emerged well from some questions at the public forum at the Broncos Leagues Club in Brisbane on Wednesday night, speaking after Federal Opposition Leader Tony Abbott.

Each candidate took one hour to answer questions from a 200-strong audience.

Some seemed disenchanted with Labor, after a drop in support for Queensland Premier Anna Bligh and the dumping of local Labor candidate Kevin Rudd as prime minister.

One audience member called Ms Gillard a hypocrite and another said she had failed to listen to the needs of Queenslanders, but she preferred to talk about jobs.

“We’ve stepped up to support jobs, we’ve got the economic plan to keep jobs going,” she said.

On her pledge to return the budget to surplus by 2013, she said “failure is not an option”.

Earlier at the forum, Mr Abbott called the National Broadband Network (NBN) “bad policy”, saying it was too expensive and one-dimensional, but Ms Gillard said it was in the best interests of Australian businesses.

Mr Abbott also drew early applause after promising a smaller government and a reduced level of bureaucracy, particularly in the health department, if the Coalition gets elected.

But Mr Abbott’s strongest point was the announcement of a proposed pilot scheme to support volunteers such as surf lifesavers, where “uni students will get a credit against their HECS debt”.

Both candidates were bombarded with questions over their policies on asylum seekers and both played down the issue.

When questioned about gay marriage, Ms Gillard and Mr Abbott stayed true to their party’s policies, refusing to endorse it.

A broad range of questions were asked but there were none about climate change during the forum.

Both candidates vowed to spend the final days campaigning hard before the election this Saturday.