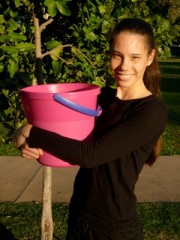 Meet Kim Brown. The Tamborine Mountain resident uses a single bucket of water to wash herself, sleeps on the floor and relies on candles to heat her house. This may seem a little extreme to some, but for Brown it’s a matter of adaptation. Instead of calling a local repairman when Brown’s solar hot water system broke down she defied the wintry conditions, making washing out of a bucket a daily routine.

“People don’t do things… unless a situation requires them to adapt,” Brown says.

For Brown the environmental benefits outweigh the skin-tingling discomfort and like with every good routine, it comes with its own perks.

“It’s one of those things that once you get used to it you can quite easily stay with that habit,” Brown says.

“It just so happens that everyone is… used to consuming so much water.”

“It just involves me boiling one kettle of water which I do also use to make a cup of tea at the same time (laughs),” Brown says.

Environmental scientist and sociologist, Dr William Metcalf, says that while he won’t be going to the same lengths as Brown any time soon, he applauds her determination, albeit unusual.

“I think it’s absolutely imperative that we have people out there… at the front of change, waving the flag,” Dr Metcalf says.

“But I’m probably not going to stop having a hot shower myself.”

Like Brown, many environmentalists have settled in Tamborine Mountain and other south-east destinations such as Byron Bay and Maleny over the last thirty years, attracted by the quiet lifestyle and beautiful surrounds.

Dr Metcalf offers a simple explanation for the trend.

“We all like to be with like-minded people and… that’s why you get these concentrations.”

But he gives a dire warning to those planning a ‘green-change’.

“You can love a place to death,” Dr Metcalf says.

“Too many people coming with the best of intentions can destroy the very thing that they’re trying to enjoy.”

While her solar hot water system has since come back online, Brown continues to wash with a bucket. The only time she will use the shower is when washing her waist-length, black hair – using water sparingly of course.

“I will just wet myself with the shower head and then turn it off.”