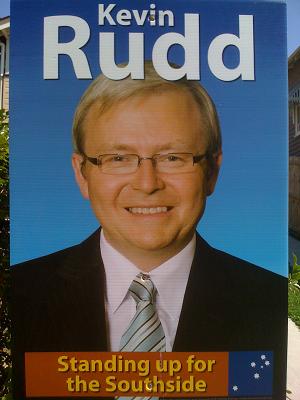 Gregory Romans, Liberal Democrats candidate for Griffith, says the bid for the seat has become a popularity contest with Mr Rudd at the centre, but despite that, he says he is not worried.

“The major parties and their leaders always attract the lion’s share of the media so nothing is really new,” he said.

“Ultimately there is not much one can do to control what the media chooses to cover.”

But Mr Romans says although Labor seems a popular choice for voters of Griffith, he says a vote for a minor party is not insignificant.

“A vote for a small party is not a wasted vote if that party’s policies reflect what you believe in,” he said.

Meanwhile, Australian Greens candidate for Griffith, Emma-Kate Rose, also says it is important voters make well-informed and independent choices when voting this Saturday, regardless of a party’s profile.

“It’s a privilege to be living in a democracy where your vote really counts,” she said.

“Being informed through websites like GetUp!, the Australian Conservation Foundation, the Make Poverty History forums, and independent media is vitally important when voting for your future leaders.” AEC Queensland manager Anne Bright says it is an Australian citizen’s obligation to vote and to ensure their vote is valid, whilst also educating themselves about their political choices before heading to polling booths.

“To be an informed elector and member of Australia’s strong democratic system … you would have to be attuned to what you hear on the radio [and] what you read in the papers,” she said.

“By visiting these websites you can understand what the party is standing for, what their policies are, and what their intentions are,” she said.

But first-time voter and Liberal National Party (LNP) supporter, Josh Hanbidge, said there is just one thing needed to ensure voters receive all of the information required to make an informed decision.

“At the end of the day it comes down to the fundamental values that constitute our democratic way of life,” he said.

“Equal representation of candidates is paramount to keeping all voters well informed about the decisions that will affect their future.”

However, Mr Hanbidge said equal representation is a reality that may never be realised.

“The media have an unparalleled ability to latch onto the juiciest story of the election and drain it dry,” he said.

“Kevin Rudd and his unceremonious removal from office has been no exception.”