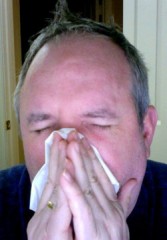 The cold and flu season is not quite over. Photo: F Delventhal www.flickr.com

Queensland Health has warned a second outbreak of the Influenza Swine Flu (H1N1) pandemic is possible, even though this year’s flu season has been mild.

There have been up to six cases of the H1N1 virus reported in Australia already this year. Queensland’s Chief Health Officer Dr Jeannette Young released a statement saying hygiene is the frontline defence against spreading and catching influenza.
The statement also said no-one should be complacent about influenza as it is a highly contagious and serious disease that can lead to pneumonia. Influenza results in 2,500 deaths on average in Australia each year.

Pharmacist Mimi Le says a reduction of Influenza cases could be because people are getting immunised earlier.

“This year people were trying to get hold of flu vacs in March, so when it hit winter season…people were more prepared,” she said.

“Even though it sounds so simple, it’s what prevents you from spreading germs,” she said.

Student Andy Tafilaj contracted Swine Flu last year and says the Government needs to help people who are diagnosed with the virus.

“I don’t know what they’re really doing to help the people who actually have it. We were told to stay inside the house and not infect anyone else and left alone to look after ourselves,” she said.

Ms Tafilaj says it was a difficult recovery.

“I myself was struggling to breathe when I went into my coughing fits, so face masks and gloves aren’t really going to help them,” she said.

The Pharmacy Guild of Australia has sent preparedness kits containing face masks and hand sanitizers to pharmacies around Australia to protect them against a possible pandemic.  The Guild’s spokesperson, Michael Pittman, says protecting pharmacies will ensure they can continue to provide proper health care.

“What we want them [pharmacies] to do  is have infection control procedures and…personal protective equipment such as facemasks on hand in case of a pandemic…so that if someone needs a heart medicine they can get it,” he said.

“If you’re not prepared for a pandemic when it happens then it’s too late”.