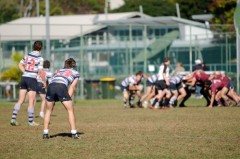 The states young rugby stars are set to thrill (Photo by Tom Hanson courtesy of rugbyunion.com.au 31/7/2010)

Queensland’s premier under 20s rugby competition is heating up as the next generation of Wallaby superstars cannon themselves into the premier colts finals.

Only one competition round remains before the finals launch into full swing and given the current standings and recent form of the competition, the premiership title is up for grabs.

Only the top four sides will advance to Queensland’s spiritual home of rugby, Ballymore, later this month to compete in the finals series, but two teams on the cusp of qualification still pose a credible threat to the top teams.

All of the top six have proven they have what it takes to play grand final winning-footy on any given day.

Heralded by opposition coaches as the classiest side in the competition the young men from the Goldy are the current favourites to take out the title.

The Breakers are a side of immense class, but no question remains about their ability to muscle up in tight if the occasion demands physicality.

They also boast the competition’s second top try scorer in Taniela Tuivanuavou, their supremely quick winger who is currently scoring at a rate of try a match this season.

Rugby Gold Coast’s coach, John Dart is confident in his side’s ability, but knows there’s still a way to go.

“There’s still a lot of rugby to play, of course we’re going to be up there at the top and we’ll be competitive,” he said.

“There’s some strong sides out there, but we’ve got some great talent, particularly young [Taniela], he’s been great for us out wide,” he said.

Strong across the board with a scintillating back three and very mobile set of loose forwards at their disposal, their expansive, open play style of rugby has proven difficult for many opposition sides to contain.

Brothers have performed well against the top sides this season, but were unable to knock-off the Gold Coast at home. Interestingly, they have found Easts to be a bogey side this season and would be glad to see them out of contention for the finals.

Souths’ 2009 premiership winning coach Sione Fukofuka highlighted Brothers’ possible weakness on the fringes of the ruck earlier this season to Rugbyunion.com.au, and very nearly upset the Brethren at home with such tactics.

The Brethren have shown what it takes to pull games out of the fire in the past few weeks, defeating Souths 33 -31 and drawing with Sunnybank 31-31 last round in two very close matches.

Brothers’ coach Duncan Macmillan wishes to keep a clean focus as his side rolls into the finals.

“It’s all about keeping true to the process and taking each game as it comes,” he said.

“I think we’ve nearly got a top two finish tied up, but if even if we don’t we’re guaranteed to be there come finals time in the top four at least, we just need to be at our best when crunch time comes.”

Jeeps clearly have what it takes to close out the top teams, boasting the competitions best defensive record, conceding only 294 points in the entire season at a little over 17 points per game.

GPS proved just that in round 16 by beating the Gold Coast 31-26 effectively discrediting the the Breakers’ much-lauded “competition favourites” status.

Jeeps are also fortunate to have a high-scoring flyer Todd Winkley on the wing who has found the line 14 times this season.

Openside flanker Jack Marshall was also instrumental in their success over the competition front runners in round sixteen and has been an immensely pivotal player all season.

Both Marshall and Winkley will need to be at their best if they are to capitalise on their side’s good defence in turning pressure into points against the top sides.

With a big, physical forward pack that kept up with Brothers’ mobility in their 31-31 draw last round, Sunnybank has what it takes up front to prove a powerful force in the finals.

The Bankers also have some very quick and slick backs, starting in the halves with the Matahaere brothers Cayden and Lincoln and extending out wide to centre Ned Mott, who has proven a try scoring machine this season.

They also also have the great fortune of running out the competition’s second highest point scorer, Jason Hofmeyr who is a proven menace from fullback with the ball in hand and off the kicking tee, racking up a  personal tally of 177 points this season.

Sunnybank also has the best for and against differential in the competition despite only being in fourth position on the ladder.

Roy Saunders, Sunnybank’s coach will be taking a virtually unchanged game plan into the finals citing execution as a pivotal aspect of finals success.

“I don’t think we’ll be changing much come finals time, we’re a side that can be very hard to beat on our day and that goes the same for virtually all of the sides at the top end of the comp,” he said.

“We just need to take our opportunities when they come and make sure we start our games well.”

Residing just outside the top four, Uni are only two points behind fourth-placed Sunnybank, and will need to beat the Bankers this weekend if they are any chance of making the finals.

Uni have the competition’s best attacking record scoring a massive average of 32 points a game.

Uni definitely have the points in them to pull it off as the students also boast the competition’s top try scorer George Morseu, with 20 tries for the season so far.

However, Uni also have the worst defensive statistics allowing in more points than any other side in the top six by a significant margin.

Despite their Premier Colts side languishing in fifth place, Uni have proven to be the strongest Premier Grade side in the men’s competition this season by a significant margin.

Despite their winning ways not cascading down to the Premier Colts in its fullest form, by having such a strong premier grade side, much of the talent in the colts competition can stay where it is.

Many clubs with less depth and strength in their premier grade sides can ill-afford to leave their talent in colts, such is the luxury Uni enjoys.

The Tigers are virtually out of competition, a disappointing reality especially as they have  beaten some of the top sides this season.

They will require incredibly fortunate results above them on the table and will need a bonus point victory this weekend against Norths to make the top four.

A bonus point victory may not be out of reach, as Norths came off a 63 point flogging against Uni last weekend.

Easts made the finals last year but bowed out in the minor semi v Sunnybank.

All sides in the running for the premiership have over 50 bonus points between them for scoring four tries or more in a game.

This is most exciting for rugby fans across the state, indicating this finals series will certainly contain a lot of running rugby, a lot of tries and certainly a lot of talent.

For more information on stats, fixtures and results qru.com.au contains all you need to know about Queensland Rugby.

Rugbyunion.com.au Also contains some stellar rugby news from the grass roots to the tip of the Wallabies top.