Construction ‘cleared up’ as election looms 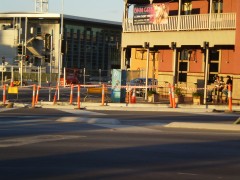 Residents affected by the Northern Busway construction site appear to be receiving a welcomed break within the two weeks before the Federal election, according to one local.

Jonathon Haines of Wooloowin, in Brisbane’s north, said his street has experienced continuous noise, shaking and stench due to the construction.

“There are always loud trucks going past from early morning including Saturday. We get the shaking, noise and stench as well,” he said.

“A few weeks ago when Kedron Park Road was closed off and the two streets over, all the traffic was diverted to this street. It was like a car park out here.

“But in the last two weeks before the election, it seems to have cleared up a bit considering this is a Brisbane marginal seat.”

BrisConnections informs the construction is expected to continue to 2012, but Brisbane Central MP Grace Grace claims that the works have not been re-scheduled to win voters.

“I’m not saying [the construction] has finished completely. I was in Parliament yesterday campaigning for the residents. It may just be a particular part that has finished and moved on.”

Kedron Park Hotel has also experienced shaking and loud disturbances according to Hotel Manager Renee Cummingham. The main entrance from Lutwyche Road was until recently blocked off with pub goers required to take a back street detour.

Ms Cummingham was not willing to comment on the extent of clientele loss but said, “It is not brain surgery that this would occur but the council has been very supportive.”

However ex-resident Dominque Wiehahn and her four housemates were not so patient with the council and moved homes as soon as their lease was up.

“We used to count down the days until Sunday so we could sleep in past 6am because every other day the workers would pull up outside our house in huge trucks with the radios on loud and then start drilling around 7am,” said Ms Wiehahn.

“There were also works on during the night which left our house shaking, and sometimes kept us awake for hours.

“As uni students it was nearly impossible to get a place due to our limited rental history. It took us a month and 13 rejected applications before we did find somewhere.”

Other residents have not been so lucky and have been forced to sell their properties below cost or settle for the disturbances.

“A few of the apartments over the road sold in the year when we were there too for a lot less than they would have fetched in other circumstances, but people were just keen to get out,” Ms Wiehahn said.

“The authorities knew what was going on, they use to send us a newsletter which informed us to expect visible shaking 24 hours a day as well as clearly audible drilling.”