Walk Against Warming heats up election 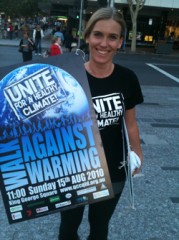 Queenslanders gathered at King George Square for Walk Against Warming on Sunday to protest the lack of ‘green’ policies in 2010’s federal election.

The nationwide event focused on topics such as renewable energy and public awareness on climate change.

The event came at a crucial time for the upcoming election.

“You could argue Labor has gone backward in terms of greener policies and Liberal has never had a defined policy on dealing with climate change,” he said.

“I don’t expect it [the event] will lead to overnight changes in policies.”

Co-ordinator of Queensland Conservation Council, Toby Hutcheon, said the event highlights the importance of a sustainable future for all Australians.

“The reality is it’s about our future and it’s the last opportunity to send a message for this election,” he said.

“Sadly both of the two major parties have backed away from climate change policies.”

The event hoped to stir public dissent in a bid to send a clear message to federal politicians.

Recent research conducted by the ABC found that some politicians do not understand climate change well.

Brisbane candidate and member of the Australian Labor Party, Hon. Arch Bevis, said Walk Against Warming is a ‘useful focus’ for warning people about climate change.

“People have a right to know,” he said.

Co-ordinator of The Climate Sceptics in Queensland, Terrence Cardwell, said the event is a “terrible waste of time”.

“The Australian Labor Party sold their souls to keep the Greens happy,” he said.

“The public has been scammed and conned…it’s madness.

“The cost and damage done by the greens and this government is horrendous.”

The Climate Sceptics disagree there is a human contribution to climate change.

In response to Terrence Cardwell’s statements, Mr. Bevis asked people to “look at the science”.

“Awareness of climate change isn’t something that just happened in recent years,” he said.

“It’s a serious issue which must be addressed immediately”.