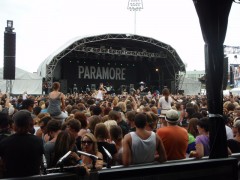 Soundwave Festival 2011 will take place in Australia’s capital cities from February 26th until March 7th and as the only major metal and punk festival in Australia, this is a day not to be missed.

After months of speculation and predictions as to who will front the stage in 2011, the line-up is slowly leaking through the cracks of forums and blogs with a band announced each week.

In its sixth year, the Soundwave 2011 line-up is rumoured to host around 70 bands and so far includes metal legends Iron Maiden and Slash, old school punkers New Found Glory and MXPX and hardcore heroes A Skylit Drive and The Blackout.

Sporting such an impressive line-up, it’s no surprise fans both young and old are anticipating the ticket release on August 26th from ticketek and other outlets around Australia.

“We all just sat down and thought about if we wanted to go to Soundwave and our first reaction was like ‘hell yeah’,” Pollard said.

Over the years Soundwave has hosted numerous international and local bands including Paramore (US), Rolo Tomassi (UK) and Brisbane boys Too Late Escape.

Rolo Tomassi vocalist, Eva Spence, says Soundwave was a great experience for the band and she was stoked she could tour with loads of her favourite musicians.

“It was just such an incredible experience. Australia is somewhere that seems like light years away and I never thought I’d be able to visit,” Spence said.

For the full line-up and details on tickets and locations head to the Soundwave Website.