Torrential overnight rain and overcast conditions couldn’t keep the crowd away from Eagle Farm racecourse, with more than 15,000 flocking to the annual Exhibition races. 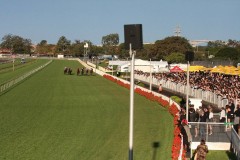 The skies eventually clear for a fine day of racing on Exhibition Wednesday. Source: Ross Stevenson, with permission.

The popular event had been in serious doubt, the track rated a ‘heavy 10’ by Wednesday morning.

“Surprisingly the track got just over four inches of rain…and when we had a look at it Wednesday morning before the stewards’ inspection, it was actually in a lot better condition than we hoped.” He said.

“We also had two big stages ready to go that caved in, where the canvas roofs filled with water and collapsed so we had to re-organise some things at the last minute.

“We usually attract 20,000 however I think the weather turned a few away,” he said.

Mr. Ferguson said the behaviour of the crowd was the best he’s seen for Exhibition Wednesday.

“We’re starting to get a better handle on it. We have an enormous amount of security and police on hand and we have responsible drinking policies…to reduce the binge,” he said.

Despite the rain-affected track being  declared safe to gallop on, a few horses found the boggy ground too much, some labouring in the heavy going.

The overcast skies begin to clear for the first race, as Moncalieri struggles down the outside in the heavy conditions. Source: Jemma Cutting

Local trainer Brian Smith watched as his promising mare Moncalieri was steered towards the outside fence by jockey Chris Munce, in search of better ground in the first race.

He later made up for the loss by winning the $75,000 AB Sinclair Handicap with the talented 5-year-old gelding, Meet George.

It was also a big day for young Mitchell Wood, the 17-year-old apprentice jockey having his first ride at a Metropolitan class meeting. 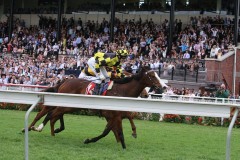 “I thought I was going to get there,” Wood said after his mount stormed home late in race three to run second to Shedaboss.

This year’s event gave punters the chance to win an iPad each race by finding the jockey decked out in Nova logos. A trip to Thailand for four people was up for grabs in the losing-ticket barrel.

Performances from Olsen VS LC, Van She Tech and the Hey Now DJs also kept the young people entertained.