The Gold Coast Suns have outlasted a determined second half fightback from the Werribee Tigers to post an important one-point victory at Southport.

Only six months out from the start of their debut AFL season next year, the win is the Suns’ fifth for the year and was their last home game for the VFL season.

The Gold Coast team appeared energised and well-prepared as they quickly took the lead in the opening quarter. As the visitors steadied and registered their efforts on the scoreboard, it was game-on and the first quarter played out with solid performances from both sides.

With scores level at the first break, the coaching staff urged the Suns to keep their focus and remember their training.

“We’ve got to know our structures, know our roles,” Coach Guy McKenna said.

The second quarter saw the home side push out their lead, with some brilliant work from key Suns players. Small forward Alik Magin was influential and his ability to out-run defenders allowed him to set up numerous scoring opportunities for the Suns and kick a major himself.

Brandon Matera powered his way to a four-goal haul and was another strong target up front for the Suns midfielders.

After the long break, the momentum shifted and the Tigers dominated the quarter and reduced a 30 point margin to just 4 at the final change.

The last quarter was a desperate struggle from both teams as the late afternoon breeze picked up and scoring opportunities seemed to be few and far between. The Tigers’ defensive pressure was strong and their midfielders fought hard through the middle.

With his first VFL goal, 18-year-old Piers Flanagan kicked the goal which would seal the game, after a last-minute Tigers attempt hit the post.

It was an encouraging win for the fledgling club, which is already gathering a strong fan base at the Coast.

James Robba, of Broadbeach, said it was a sign of things to come.

“They are moving the ball much better than last time,” he said, “and they’re looking much stronger.” 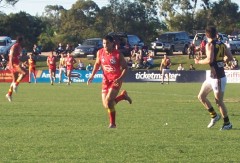 The Suns’ most high-profile player, ex-Rugby League turned international Rugby star Karmichael Hunt, barely registered his involvement in the match and did little to silence his critics.

After being named in the team list as half-back, and with McKenna singing his praise for the convert as a defender,  Hunt was moved forward at the start of the third term and remained there for the majority of the last term.

Hunt’s fitness level is still a major factor in his performance so far, which should improve with a tough pre-season.