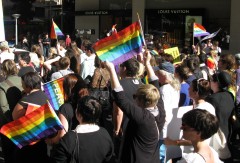 The general public joined with queers from around Queensland to celebrate and rally for equal rights on the National day of Equal Love.

The rally, which began in Queens Park Brisbane city at 1pm Saturday August 14, saw over 800 members of the public listen to speeches and march through the city.

Co-founder and co-convenor of Equal Love Brisbane, Kat Henderson, said the rally intends to put pressure on the major political parties to “take a better stand on this issue, because it is just so homophobic”.

“Why is the state intervening in people’s personal lives? We don’t tell Julia Gillard who she can or can’t marry. We don’t deny her of that choice so why should she deny us those rights?” Henderson said. 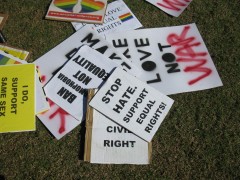 struggling due to discrimination.

“Nobody should be suppressed in society, in any society on any basis. The LGBTI [lesbian, gay, bisexual, transgender, and intersex] community is sick of being discriminated against and it shows in statistics.”

“The suicide rate is much higher for people that are LGBTI. Depression and rates of mental health occurrences are higher in this community because of discrimination, because of homophobia,” she said.

Along with Nova 106.9’s breakfast show host, Meshel Laurie, acting as MC, the rally’s participants listened to speakers, such as Shelly Argent from PFLAG (Parents, Family and Friends of Lesbians and Gays), Larissa Waters from The Greens Party, author Sharon Dane and two Equal Love members.

The speakers called for the major parties to join them in the fight against homophobia and to allow same-sex marriage rights in Australia.

Amelia Ball, 19, said she is hopeful people recognise the LGBTI community is out there and “are going to fight until we get equal rights”.

“We are not going to stop until we get what we want, and what we want is equal rights. We are not angry. We are just upset we don’t have the same rights as everybody else,” she said.

“I hope they not only implement same-sex marriage rights but everything, IVF, surrogacy, adoption, taxes, everything,” she said.