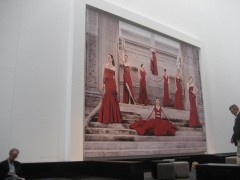 Valentino red: One of the many famous photographs that complimented the exhibition. (Vivien Von Drehnen)

The Gallery of Modern Art says an exhibition of Valentino’s finest pieces could boost Brisbane’s fashion industry and be the most successful exhibition it has ever hosted.

The exhibition runs from August 7 to November 14 and boasts 100 ensembles, including most of the key pieces from the exhibition ‘Valentino: Themes and Variations’ held in Paris in 2008.

GoMA’s Senior Curator Exhibitions and Research Miranda Wallace, whose role was to interpret the exhibition for local audiences says having an exhibition of this quality come to Brisbane is remarkable.

“We knew it would be like nothing we’ve done before; we wanted it to have a monumental impact and to really create a bit of a sensation because it is such a coo for us to have it,” she said.

The Gallery’s Director Tony Elwood and Art Exhibitions Australia were in discussions with the museum in Paris for a long period of time before they agreed to let the Valentino show come to Brisbane.

“It’s obviously not an easy thing to get a show like that to come to Brisbane, it would normally go to somewhere like New York, but we put up a very good argument…In the end they had to give it to us,” said Ms Wallace.

QUT Fashion lecturer Dr Tiziana Ferrero-Regis, who is organising a series of talks to accompany the exhibition, says unless you go to museums in Europe where they have exhibitions like this all the time, it is a once in a lifetime opportunity.

“I’ve seen a few and this would probably be the best so far.  Brisbane hasn’t seen many fashion exhibitions until now,” she said.

“I suspect having Valentino is as good as it gets…I don’t see how it could get any better.”

Dr Ferrero-Regis hopes the hype of the exhibition will enhance Brisbane’s fashion industry by inspiring people to invest in durable, quality pieces that establish a connection with the owner.

“It will give a good boost in terms of people thinking about couture and thinking about maybe changing the way in which we look at dress today,” she said.

“What we buy from a shop we wear for one season and we throw it away, so there is no relationship established with the dress the way it used to be; so I think it will make people think.

“It will boost a desire for beautiful fashion and beautiful dress.”

Ms Wallace also believes the exhibition will add an extra dimension to Brisbane’s fashion scene by increasing the awareness and knowledge of the audience’s interest in fashion.

“The knowledge of the public will be broadened much more from having seen couture, which is what this exhibition is really remarkable for, it brings a kind of fashion that is very rarely seen in Australia,” she said.

Dr Ferrero Regis also hopes that the attention to detail and craftsmanship displayed in Valentino’s garments encourages young women to learn how to create and sew again.

“I hope it will inspire people again to learn how to make it;  40 years ago, 30 years ago you were going to a party and night and you didn’t have much money you were making your own dress, now that doesn’t exist anymore,” she said.

“So hopefully it will inspire more young women to be able to learn the craft again, because you can always be very original.”