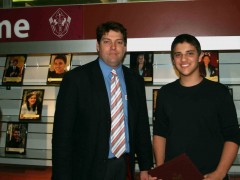 The building, approved by the Federal Government under the Building the Education Revolution (BER) program, is a part of the $821.8 million funding for construction or refurbishment of Science and Language Centres in secondary schools.

The inaugural presentation evening recognised students who have placed in a national Science competition, been a finalist of the BHP Billiton Science Awards or received a Gold Crest Award through induction to the Hall of Fame.

Head of Keebra Park Science Department Janet Rayner said the Hall of Fame was essential to provide students with an opportunity to see what they have the ability to achieve.

“I have already had kids setting goals to be in the Hall of Fame…we want inspiration for young kids to follow,” she said.

The new facility has enabled the school to develop a Science of Sports pathway which aims to integrate core science principles with biomechanics, physiology and exercise performance.

“We have a large number of students who are interested sports pathways and this gives us the opportunity to meet their interests,” Ms Rayner said.

“We would like to have more students enrolling to the school for our new academic excellence program and we are hoping this facility will help utilise that,” he said.

A survey of 50 individuals conducted by SubTropic found 46 per cent of parents would not consider enrolling their children in Keebra Park despite the development of the science precinct.

However 90 per cent believed smaller classes and personalised teaching is more effective in developing a child’s education.

A spokesperson for the Department of Education, Employment and Workplace Relations said the school qualified for the substantial upgrade after a highly competitive selection process.

“Applications were assessed by the National Application Panel based on specific criteria,” she said.

“Schools had to demonstrate a level of disadvantage while identifying the need for the specified building…and have the capacity to complete construction within the allocated timeframe.

“The funding aims to allow schools to access modern facilities with cutting-edge technologies in their own learning environments.”