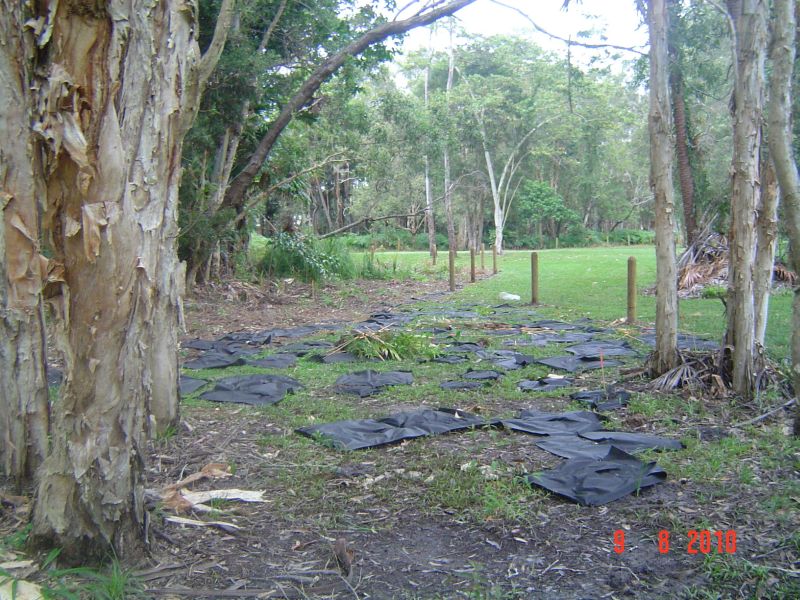 Scattered weed mats are all that remain of this damaged site in Heritage Park. Source: Joan Heavey, used with permission.

200 newly planted trees have been ripped out of the ground and vandalised shortly after they were planted at Heritage Park, Tewantin.

Girl Guides, local school children and volunteers had planted the trees as part of National Tree Day on August 1.

Heritage Park Bush Care Group spokesperson Joan Heavey said she found the damage on Monday morning after working in the park on Sunday.

“The first thing I noticed was that some trees were taken out and stacked very deliberately in the same direction while the rest were completely missing,” she said.

“Our group, which devotes 4 hours regularly maintaining the park, had to quickly save the plants that were left.”

Mrs Heavey said the event was most disappointing for the young children who’d been involved in the planting.

“To see this kind of destruction is heartbreaking,” she said.

Noosa and District Landcare Natural Resource Manager Phillip Moran said it was saddening to see such a blatant act against the park.

“It’s such an unfortunate incident in a community which doesn’t see a lot of vandalism likes this,” he said.

“It really goes against a lot of our core values and the environmental education we’ve been trying to promote.”

“It’s a breath of fresh air in the centre of the city,” he said.

“It acts as a filter for the houses nearby and also assists in maintaining the quality of Noosa River.”

Mr Moran said anyone with details about the incident should come forward to the council or police.

“We don’t like to get into community struggles but considering the significance of National Tree Day and the efforts of the Girl Guides and other children it seems a shame to have nothing happen from this desecration,” he said.

“We’re hoping that in doing so the people who did it will see what gooses they’ve been.”