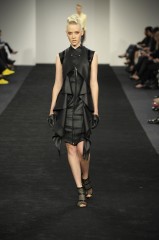 Fashion designer Christopher Dobosz, from Sydney TAFE, has taken out the competition with his dark yet understated collection titled Dorian, at this year’s Nandos Australian Fashion Graduate of the Year Award.

The award show took place on the fourth day of the Mercedes Benz Fashion Festival 2010, and as well as the prestigious title, Dobosz will receive a prize of $5,000.

“It’s really exciting to see a huge following of designers in Brisbane; Mercedes-Benz Fashion Festival is the best platform for emerging designers to really get there.”

Mercedes-Benz Fashion Festival Director Lindsay Bennett says the award has boosted the careers of its participants for the third year running.

“This competition gives the best emerging designers a platform to show the Australian public the incredible talent that they have to offer,” Lindsay says.

Dobosz’s award-winning collection opened with a model clad in a black leather dress, zipped directly down the front, with swathes of leather material along the front in two long ruffles.

The collection continued with an array of innovative textiles with clever tailored jackets in mushroom, steel blue and black.

Other highlights from the show include Elliot Ward-Fear, also from Sydney TAFE, with his galactic goddess collection featuring colossal, clear plastic spikes protruding from the shoulders, neck and arms of his models’ garment; and Ella Bailey, from MSIT, with her graphic prints in shades of orchid and plum.

Jeremy Gillis and Robyn Taggart, both from QUT, made up the Queensland contingent with Jeremy showing the only menswear collection of the twelve graduates.

The award has previously proven to give young designers their big break.

Since winning the Australian Graduate of the Year Award in 2008, Dion Lee, a designer who has well and truly arrived on Australia’s fashion scene, stole the spotlight at this year’s Rosemount Australia Fashion Week and is about to embark on the UK market.