Politicians and Christians are divided after a local reverend announced he will conduct same sex marriages during Equal Love Day in Brisbane. 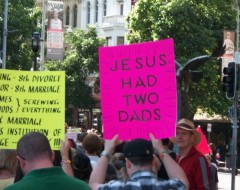 Religion has been a major topic of previous local campaigns. This year numerous Christian leaders have expressed their support of gay marriage. Source: Equal Love, used with permission.

Brisbane Metropolitan Community Church Senior Leader, Reverend Leigh Neighbour, will be one of many Christian leaders around the country campaigning on August 14th for marriage equality.

He said the gay marriage debate is a human rights matter.

“There are people that believe the marginalisation of human kind has to stop,” he said

“We [Metropolitan Community Church] and I myself believe that we are created as equal human beings and we are not to be marginalised by anyone.”

“From a church point of view we don’t believe we can change the nature of marriage which is a lifelong union between a man and a woman and open to the good of procreation through their own marital acts,” he said.

“Both the government and the opposition have expressed that they support the traditional understanding of the nature of marriage.”

Brisbane Family First Candidate, Mark White, agreed with the Archdioceses and added children of gay married couples would be disadvantaged.

“The rights of the child are that they should have a mother and a father to learn from,” he said.

“I’m not saying two women or two men wouldn’t be able to care for a child…. marriage isn’t about love – it’s about a commitment between a man and a woman to raise children to be good citizens.”

Brisbane Greens Candidate, Andrew Bartlett, said most Australians are in favour of legalising gay marriage despite the views of the country’s two major political parties.

“It’s undoubtedly something that there has been growing public support for over time,” he said

“He can say whatever he likes… you know … Majority of Australians are for legalising drugs. That’s a load of Hogwash isn’t it?”

Equal Love Day kicks off around the country at one pm on Saturday.