Look out Jessica Watson, a new breed of sailor is on the rise. 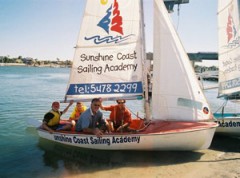 Kids from the Maroochy sailing club learn the ropes on Sunday.

Children from the Maroochy Sailing Club took to the water on Sunday in a demonstration of sailing’s new pulling power among youth on the Sunshine Coast.

The kids set sail with brand new boats which were bought by the club in response to a huge rise in youth registration over the past few months.

MSC Commodore John Pearce said the desire to sail has never been stronger thanks to the sport’s recent media coverage.

“We’ve gone from having almost nobody 12 months ago to 26 of the little guys signed up today,” he said.

“We just got 26 new Optimist Dinghies which makes us one of the largest fleets on the East Coast.”

“(The recent media coverage) gives us a higher profile and attracts more sponsorship and donations. We’re getting a lot more people to help out.”

“The Jessica Watson story is giving everyone a focus to get together and go forward.”

“Sailing’s a great sport in the respect that everyone can do it- male, female, young or old,” she said.

“Jess has shown that anyone can achieve their dreams and the girls who’ve joined our sailing crew are now thinking ‘I can give it a real go.’” 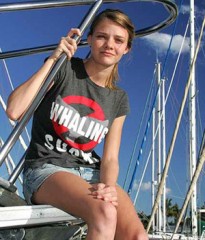 He said the vessels were helping break down barriers that often stop beginners from taking up the sport.

“In terms of where parents start their kids off sailing, if they’re not already into sailing it’s like the chicken and egg – they don’t know where to start. These boats are exactly the right kind to start with.”

“I think what’s ignited people’s imaginations is that if you get the skills in sailing, in the future, they themselves can sail off around the world. It’s a skill you’re going to have forever.”