Nudgee College has tied for the premiership with Brisbane State High School and The Southport School, after completing a rousing comeback to overwhelm State High 29-22 in the final round of the GPS rugby competition. 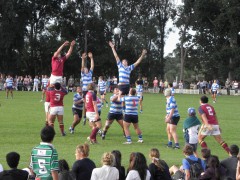 State High were undefeated before the match, having won seven from seven, while Nudgee and TSS had won six and lost one.

Nudgee’s Director of Rugby Anthony Connellan was over the moon with his team’s performance.

“We’re all very happy that we made a solid improvement throughout the year and finished well against the best,” he said.

“The boys were pretty excited.”

Director of Rugby at State High, Richard Dyer, described the more subdued mood in his camp after the defeat.

“I’m sure the boys are disappointed to have lost the game to Nudgee, but they did their best, so I’m sure they feel very content with what they did during the season,” he said.

“We’re very proud of the team and the coaches, they’ve all done very well and represented the school tremendously.”

The match was played to a high tempo with huge crowds of passionate supporters for both sides ensuring the atmosphere was intense.

State High were the first to put points on the board, before the referee awarded a penalty try to Nudgee for State High collapsing a maul near the try line. 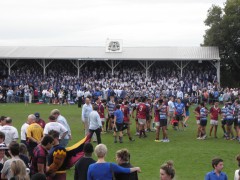 State High responded with gusto, scoring from the ensuing kick-off through an unstoppable rolling maul.

Not long after, they scored again, with centre Chris F’Sautia showing exceptional speed down the left side line to post another five pointer.

The half-time score was 17-7 to State High, but Nudgee came out all guns blazing after the break and scored three quick tries.

The only thing holding Nudgee back was their inability to convert their tries, with three straight conversions sailing wide.

State High were a bit shocked by the Nudgee revival, but recovered enough to draw level at 22-all via a stunning long-range try to Josh Binks.

The deadlock ensured tension could be felt in the air.

State High clearly felt it, giving away two crucial penalties for abuse at opposition players and for giving the referee backchat.

In the end Nudgee had the final say, another brilliant piece of ball movement through the backline giving them the last try and the sealer.

For more match reports on the final round of the GPS season, go to rugbyunion.com.au