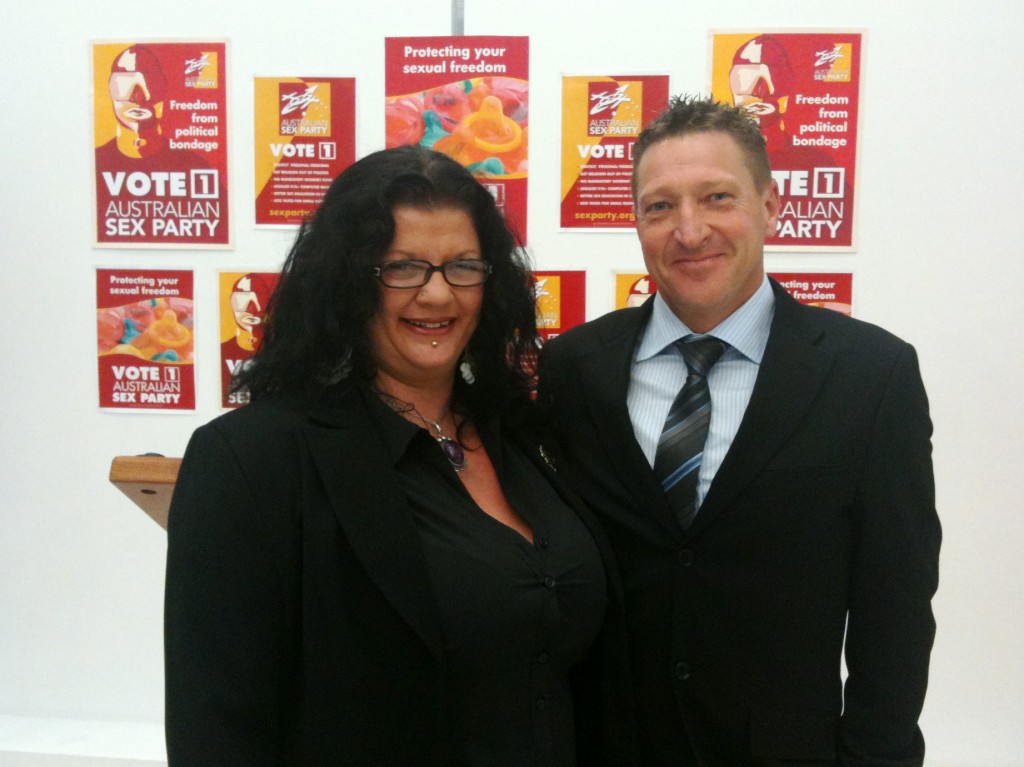 An artist famous for using his penis to paint, “Pricasso”, was also at the event and treated guests with a politically charged piece featuring Prime Minister Julia Gillard and Opposition Leader Tony Abbott.

The candidates will continue the party’s Queensland campaign by focusing on issues such as censorship, abortion, sex education and religion.

Ms Patten says Queensland’s censorship denies people the right to view publications and films that are legal in all other states of Australia.

She says the government is trying to “cottonwool” society and people in Queensland are getting sick of living in a “Nanny state”.

“Central to our policies is the question, does the government really need to intervene in our lives on the level that they are today? Government needs to stay out of adults’ lives as much as possible,” she said.

Although this is the first political involvement for Mr Sheen, otherwise known as Mel Bourne, he says he’s always been passionate about the party’s policies.

“We’re very restricted in what we can do in Queensland, availability of X-rated material is actually illegal and that’s a little bit crazy especially when the government can draw a little bit of tax from that,” he said.

Ms Patten, who came up with the name for the party, says people are still very nervous about the word “sex” and changing this is important.

“It’s much bigger than just what we do in the bedroom, it’s our gender, our sexuality and there are so many issues that relate to it such as health, discrimination and education”, she said.

Ms Patten says that a lack of sexual education in schools is contributing to issues such as teen pregnancy, sexually transmitted diseases and sexual violence.

“We would be in a much happier society if people were taught honest and frank information about sex and relationships,” she said.

Having worked with politicians for almost 20 years, Ms Patten says many agree with the Australian Sex Party’s policies, but won’t commit to any social change.

“We’re a strong civil liberties party, which is needed in this current climate when you’ve got Internet filters, keeping people’s private information and not recognising same sex marriage,” she said.

An Australian Sex Party supporter brought in cake for the one-year celebration and numerous suggestive jokes were made, including cutting it into “sixty-nine pieces” and “blowing the candle”.

Mr Sheen says that the Australian Sex Party is a minority group and “we’re really just here to keep government honest and make sure they aren’t too controlling”.