Festival-goers at this week’s Parklife music event in Brisbane are angry organisers shut off the riverstage venue before Australian band Empire of the Sun performed last weekend.

The riverstage area was closed off after the arena reached crowd capacity, making it impossible for other festival attendees to see the musical acts performing there.

One festival-goer Seana Seeto says she and her friends were at the riverstage for British band La Roux but left to see another performance at the nearby firestage.

“When we came back for Empire of the Sun, they [security] said the riverstage’s capacity had been reached and we couldn’t go in,” Ms Seeto said. 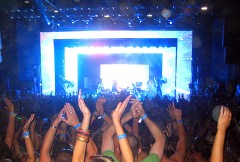 Parklife crowd cheers for Empire of the Sun: Alexandra Knott

“But people were coming out from the riverstage area and they still wouldn’t let anybody else through.”

“I don’t understand why they sold so many tickets if they can’t actually accommodate all those people,” Mr Davies said.

“My mate saw Luke Steele [Empire of the Sun frontman] a few years ago and said he was just awesome – I can’t believe we missed out.”

Jess Fidler, who says she was lucky enough to see Empire of the Sun, agrees it was not really fair to the audience to lock people out. 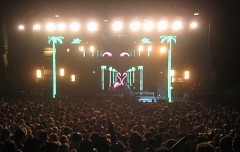 Empire of the Sun performs on the riverstage: Alexandra Knott

“My friend and I heard they might be closing it off so we didn’t leave riverstage all day because we were so desperate to see Empire of the Sun,” Ms Fidler said.

“I’m glad we saw Empire cause they were just awesome.

“But I’m really, really annoyed because we also wanted to see the band Metric [at the firestage] but we didn’t want to risk not getting back into the riverstage area.”

Ms Fidler says Empire of the Sun was the band she most wanted to see but she was still not happy with how organisers handled it.

“When you are paying so much money for a ticket, it’s not really fair that you have to miss an act just to make sure you can see another,” Ms Fidler said.

“My sister and her friends were locked out and she said there were heaps of other people who missed out too – she wasn’t very impressed.”

The Parklife festival moved next to Perth and hits Melbourne, Sydney and Adelaide this weekend.