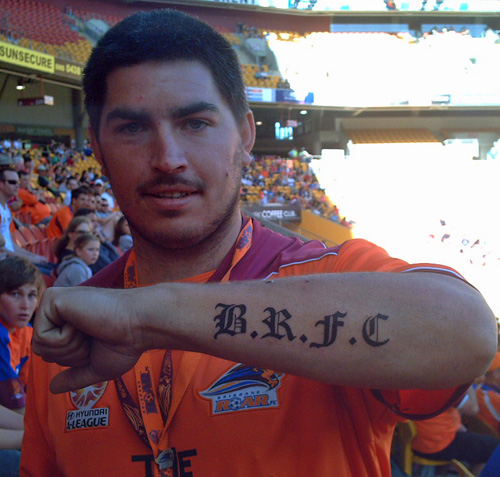 Some fans will do anything for their team: Graham Osborne

Brisbane’s win puts them one point behind the leaders in the A-League, with just one game left in the first round.

Six teams are currently separated by a point at the top of the ladder, with Brisbane in fifth on goal difference.

Sydney and Brisbane both had good chances in the first half, with Michael Bridges and Alex Brosque going close for Sydney.

Brisbane were denied a penalty early in the second half, before Miller’s cross found Moore who headed back to Van Dijk to score the winner.

“We are one point off top spot.  With all the problems that we’ve had, is it satisfying?  Yeah. Bloody oath,” he said.

Farina was particularly happy with his striking combination.

“I think Sergio and Reinaldo played well up front. You know Sergio got his reward in the end.”

“The game was equal for most of the time, but I think there were a couple of good opportunities for us as well,” he said.

“Before the end we lost our concentration and the home team punished us.”

Sydney FC captain Steve Corica was annoyed at his team’s result, but not the performance.

“It’s very frustrating because we could have been three points clear at the top, and now it’s brought everyone up with us,” he said.

Van Dyk was  quick to praise his team mates Miller, Henrique and Reinaldo, but was humble about his own goal scoring effort.

“I’m happy with the goal, but it’s all about winning the championship, and whoever’s scoring I don’t mind,” he said.

Only 7,677 fans turned up for the game; average crowds for this fixture over the last four seasons has been 24,666.

A ticketing mistake left some Roar fans angered when they arrived at half-time.

The starting time of the game was changed from 4pm to 3pm, but some tickets had the original kick-off time.