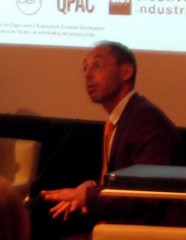 The ‘Looking for India’ session was set to focus on the Western world’s ‘devoted fascination with Indian literature’.

However, Dr Levine took the opportunity at BWF on Saturday September 12 to speak about child prostitution.

“The notion of a father selling his daughter into prostitution is an extraordinary fact of the world all of us live in today,” Dr Levine said.

He also urged anyone in the audience affected by sexual exploitation to seek medical help.

Dr Levine works with the UN on healthcare for women and children in low-income countries but says the issue of sexual exploitation affects every country in the world.

When he was asked to do a reading of his novel, The Blue Notebook, Dr Levine said he generally tries not to.

“The book is written in the voice of a 15-year-old Indian lady and I cannot possibly do it justice,” he said.

“I’m simply honoured to have tried as best as I can to give her a voice.

“I think the mere fact I’m here speaks to the power of a fictional voice on a necessary human condition.” 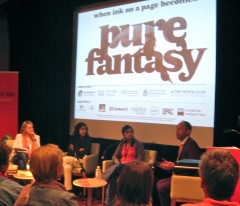 Ms O’Hara-Smith described the book as “fleshing out the inner life of a girl sold in to sex slavery”.

“This book has a purpose – it comes from Dr Levine’s research in this area and his field work in particular,” she said.

Dr Levine’s idea for the novel came from his medical research in India where he was interviewing homeless children on ‘the Street of Cages’ in Mumbai, which is known  for child prostitution.

Dr Levine says a young woman writing in a notebook outside her cage caught his attention, inspiring him to write.

The Youth Advocate Program International, which promotes and protects the rights and well-being of the world’s youth, describes commercial sexual exploitation as consisting of prostitution, pornography, and trafficking for sexual purposes.

“I believe everyone is essentially good … It’s inherent upon all of us to seek out how to tap into it,” Dr Levine said.

“[If we did] the world would be a far more beautiful place.”

Ms O’Hara-Smith also said all of the US proceeds from Dr Levine’s novel will be donated to the International and National Centre’s for Missing and Exploited Children (ICMEC).