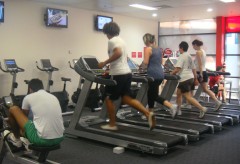 There is a new gym chain in Australia that now gives members the option to workout and train whenever they want – even at 3am.

The new gym franchise Jetts opens its doors 24 hours a day, seven days a week, to its members.

Personal trainer Leigh Fleet, from the new Jetts at Mt Gravatt on Brisbane’s southside, says the gym has been extremely popular with students.

The gym chain’s website says its membership fees are around 50 per cent cheaper than its competitors.

“We have a lot of student members … I would say one-third of all members are under 25-years-old,” Mr Fleet said.

He says Jetts can afford to provide cheaper memberships as they do not have many overhead costs.

Mr Fleet says the gym has ‘basic state of the art facilities’ but saves money by not having receptionists, sale staff, a pool or a sauna.

With over 10 years in the fitness industry, Mr Fleet is positive with the growth of the Jetts gym franchise.

“We will own the fitness world,” he said.

“Our membership sales did decrease a little bit … but we’ve actually had people who had left come back to Fitness First,” he said.

With the September school holidays well underway, both fitness franchises have allowed teenagers 14 and over – with parental consent – to train in their gyms.

Fitness First provides a FFIT program which offers free gym access to all school students during the holidays.

Jetts says on its website plans to open another 25 new clubs in Australia in the next six months.