Broncos fans will be glued to whatever TV screen they find on Saturday night, hoping the boys in maroon can secure a place in next week’s NRL grand final. 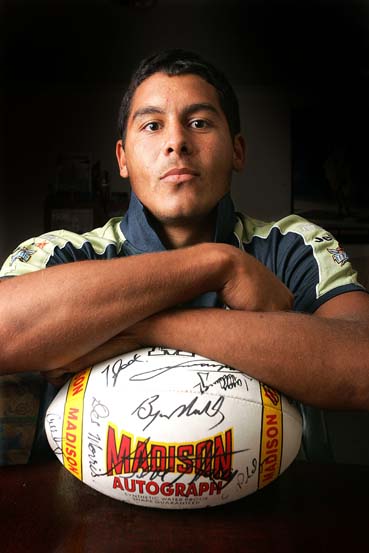 Brisbane young gun Kurtis Lingwoodock will line up for the Brisbane Broncos Toyota Cup side on Saturday night.

But there is another generation of young Broncos also priming themselves for a chance to play at rugby league’s biggest event of the year.

Baby brothers to the Brisbane NRL team, the Bronco’s Toyota Cup side are gearing up for a shot at the grand-final.

Following in the footsteps of their namesake, they too play the Melbourne Storm on Saturday night at Etihad Stadium.

It may only be the curtain raiser this year, but Broncos coaches rate Brisbane’s Kurtis Lingwoodock as a player destined to one day play the main event.

Brisbane Toyota Cup coach Anthony Griffin has been impressed with the way Lingwoodock has taken off, despite being more than a year younger than many of his Toyota Cup (under 20) opponents.

“He’s been playing very well,” Griffin said of the 18-year-old, who has come back from an injury that almost ended his career.

Last year Lingwoodock suffered multiple fractures in his back, however it hasn’t kept the second-rower quiet.

The young Broncos advanced to the qualifying final against Melbourne, following their 24-10 win over Manly at Suncorp Stadium on Saturday.

The Storm are coming off a 54-18 demolition of South Sydney a fortnight ago.

“We’ve got a lot of respect for Melbourne,” Griffin said.

“They’ve been one of the top teams all year so there is no suggestion it’s going to be easy.”

The Broncos are yet to beat the Storm this season but Griffin remains optimistic his team can win the one that matters.

“You’ve got to beat them all and we’re going down there very confident we’ll play well,” he said.

“We just need to defend well.

Playing a key role in that defensive line is Lingwoodock, who was last year contracted with the Gold Coast Titans.

“Hopefully he’s at his best this weekend.”

Lingwoodock also provides the Broncos with a potent attacking threat.

“He plays on the left edge for us and comes up with some good attacking options,” Griffin said.

“He’s fairly big and good on his feet so is hard to handle on that edge sometimes.

“He’s not pigeon-holed to any one role.”

Griffin said Josh McGuire, who has had 14 NRL starts this year, will also add plenty of fire to the baby Broncos, as will 17-year-old Corey Norman and Dane Gagai.

However it’s  Lingwoodock, who Griffin has been most impressed with.

Lingwoodock overcame a slow start to the season, but has since gained plenty of confidence.

“I’ve had a really solid year for someone who couldn’t do the off-season because of my back.

“I haven’t missed a game since then.

“I play a lot of minutes and just carrying the ball nice and aggressively and defend as best I can.”

As is the nature of the competition, Lingwoodock said he is aiming for bigger things with the Brisbane club.

“One day hopefully it will be the actual NRL grand-final I’m preparing for,” he said.

“I have so learnt so much this year, but I have so much to learn.

“My game has improved so much, but yeh I’m looking to push through to the top squad.”

With two years left in under-20s Broncos coaches aren’t in a hurry to push him too quickly.

The club’s NRL coach Ivan Henjak has already earmarked the apprentice roofer as a player to watch.

“He’ll be given every chance in the off season,” Henjak coach said.

“Having an off season this year, I think he’ll really benefit from that.

“Where he ends up after that is entirely up to him.

“Kurtis does have the talent we are fostering at the club. He’s the type of player we’ll look at building into the future of the club.”

The game kicks off at 5.30pm Saturday night, followed by the main game at 7.45pm.

Both games will be shown live on Fox Sports2.