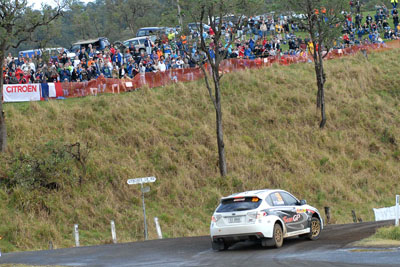 Locals watch on as driver competes on the back roads of northern NSW: Rally Australia

The local community of Kyogle, on Australia’s east coast, has been declared the real winner of the FIA world rally championship held this September 3-6.

Kyogle residents met last night to discuss the impacts of the car rally on the northern NSW community.

But most locals can only talk in positives.

Susie Colston from Kyogle Fringe Festival management says the response from the community is overwhelmingly positive despite negative coverage.

“It’s been fantastic… the town wants it [back],” she says.

Kyogle Visitor Information Centre recorded a 70, 000 strong crowd, or the equivalent six months worth of visitors over the  four-day weekend.

Anecdotal evidence suggests people travelled from as far afield as the US, Sweden, New Caledonia and Japan.

Local councillor and previous chamber of commerce president Lynette Vito says the well-attended forum exceeded organiser expectations with most in support of the rally returning.

Local Lions Club president Norm Macintosh says they raised over $10,000 from the weekend.

This combined with other local fundraisers will inject approximately $30,000 back into the community, according to a statement released by Mayor Ross Brown.

Discussion over how this money will be now be spent was one key theme arising from the meeting.

The forum is part of a wider evaluation conducted by independent research organisation Destination Research and Development, which will look at the social and economic impacts of the rally.

Jo Mackellar of Destination Research says that full findings from the research should be finalised within the fortnight.

The event returns to the region in 2011.