GC place to be in financial downturn 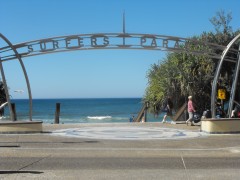 The once popular Cavil Avenue is one of the hardest hit tourist destination on the coast: Aidan Caldwell

The term ‘global financial crisis’ usually conjures up feelings of panic and anguish, with images of crashing stock markets, inflation and the feeling of tough times ahead.

However to the humble individual it is not all bad news and there is a bright light of adventure and fun shining at the end of the tunnel.

In fact, during this economic downturn there has not been a better time for Queenslanders to pack their bags and see their own state, says travel consultant expert Megan Brett.

“Domestic tourism is a great option for people looking to get away on the cheap. With local businesses in places like the Gold Coast especially struggling with the slow down there are some great deals. There’s never been a better time to take a holiday in south-east Queensland,” Ms Brett says.

Even with the current economic crisis, international travel is still the major draw card for Queenslanders looking for a getaway. Ms Brett believes the perks of travelling domestically outweighs international travel. There are  no airline fees, no long flights and no fluctuating currency rates.

A walk through the Gold Coast tourist hot spot of Cavill Avenue in Surfers Paradise shows just how desperate local proprietors are to bring in customers.

All the restaurants are offering some sort of lunch deals – from buy one get one free, to buy a drink and the meal is only a few dollars. Others are going to greater extremes. One deserted cafe has chalked onto a sign “name your price”. Another encourages a deal attractive to punters, with the sign advertising that customers can flip a coin for a free meal after they place their order.

Restaurant owner Lee Stanely believes that with international tourist numbers on the coast dwindling the only hope businesses have is from local state travellers.

“International tourism on the Gold Coast is dead,” he says.

“We still get a lot of young people like backpackers, but it’s cheaper for them to eat fast food. So cafes like mine are deserted. Even in winter a few years ago we would be busy because people from northern countries would visit us on their summer break. That has stopped now. I believe our only hope is tourists from New South Wales or people coming down from Brisbane.”

According to the last quarterly figures released by Queensland Tourism, the Gold Coast is the hardest hit tourist town in the state. With a 12 per cent fall in accommodation occupancy, less people are staying on the coast. Although the amount of rooms available has increased on the coast, the occupancy of them has being gradually declining over the last 12 months.

Resort manager Tom Stewart says fewer people are coming and staying on the Gold Coast resulting in less customers in restaurants and shops . Mr Stewart says he has not seen Cavill Avenue ever struggle so much.

“Look at this weather,” he says making reference to the record breaking 32 degree heat that Queensland felt during the middle of August.

“There are tons of people down here. Lots of families, lots of kids and heaps of couples. You can barely find a spot on the beach. But the bloody restaurants and hotels are practically empty.”

Mr Stewart is right. The beaches are full, there are lots of people walking about, but no-one is shopping in the boutique stores, eating in the restaurants and all the hotels are showing vacancy.

“People are still coming to the coast,” Mr Stewart says as he sits in front of his computer making advertisements for his hotel.

“The issue isn’t that people have stopped coming here, but they aren’t spending any money. Last year people would be crawling all over this place eating and buying, but now people are scared, times are tough.”

Restaurants and resorts are not the only places doing it hard. Retail shops are being visibly hurt by lack of sales and customers.

In just the last month two large surf shops on Cavill Avenue have been forced to close their doors and it is expected that more shops, both big and small, will follow that path.

But it seems what is bad for the commercial industry is good for the individual holiday maker.

Shops everywhere are advertising some sort of sale. From small boutique stores to big name brands like Billabong and Ed Hardy, stock must go.

Some stores are even offering 50-75 per cent off everything.

Sue Harris has managed retail stores around Surfers Paradise for over 30 years and believes she has never seen a worse time for store operators and agrees it is the best time for bargain hunters.

“Everywhere has stock coming in and it’s all the same wherever you go. Things have always been competitive here but now we really have go down. And people who want a bargain will shop around and ask if that’s the best price we can offer. Obviously it’s better to go lower on something and have a sale then not at all.”

Mrs Harris believes things will bounce back eventually, but for the time being she is concentrating on making budget.

A lot of smaller retail stores are not making enough to cover their shops rent. 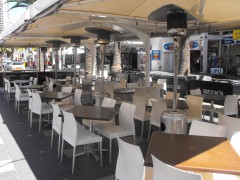 Avenue is not as popular as it once was with tourists: Aidan Caldwell 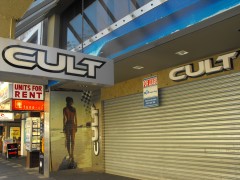 Many businesses that were once busy are now closing down: Aidan Caldwell