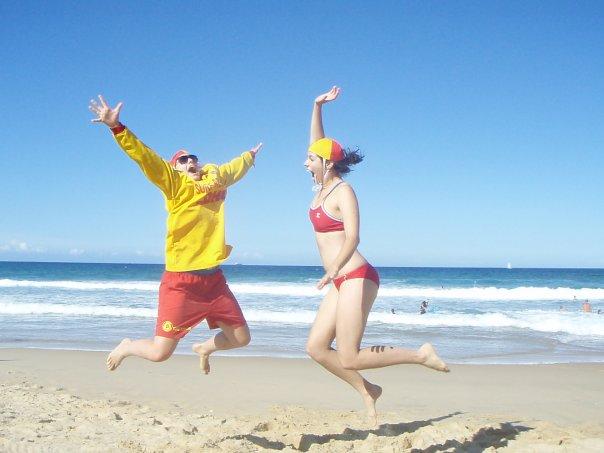 Jessie and Claire are pumped for the upcoming nipper season to begin: Olivia Pollard

Junior Gold Coast nipper numbers are on the rise but it appears their teenage counterparts prefer surfing the internet to riding the waves.

Membership numbers have increased by 33 per cent in the past five years, yet clubs are finding it harder to keep teenagers involved.

“Parents wish to introduce their children to the surf and water safety practices as soon as possible,” Mr Young said.

“But the nippers tend to drop out once they reach their teens.”

“From around under 13s and under 14s in nippers the numbers are always lower than the younger age groups,” she said.

“By that age they have generally found other hobbies, interests, school and puberty.”

Mr Young said it was harder to retain young people today than when he joined 40 years ago because of other demands on teenagers’ time. Kiana Muir (left) gets familiar with the waves as she prepares for her first nippers season this summer: Olivia Pollard

“There were no computer games [or] mobile phones… and if you were speaking to somebody they were not distracted by technology,” he said.

Gold Coast mother of four Nadine Delahunty takes her two young sons to Palm Beach nippers every Saturday.  She said nippers is brilliant for the wellbeing of young children.

“I’m so glad my boys love going…it’s not only a fantastic workout but a means for them to interact with other young kids whilst having fun,” she said.

Seventeen-year-old ex-nipper Nicolas Bedford said he gave it up because he did not have time for it anymore.

“I found that on top of more school work, other sporting commitments and maybe a couple of movie dates, nippers didn’t fit in,” he said.