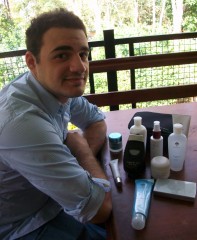 Anti-aging treatments are becoming popular amongst Brisbane men, proving that women are not alone in the race to stay young.

According to figures released by Cosmetic Physicians Society of Australasia, Botox procedures for men have increased by 10-20 per cent over the past year.

Specialising in Botox, Ashburys wrinkle treatment centre in Windsor has gained a large clientele of men, which manager Tara Sthomburk says is due to pressure from the opposite sex.

“Usually the men are brought in by their wives, so it’s not just a matter of pleasing themselves but also it’s about keeping up appearances for others,” she says.

“Our male clientele differs from 40 to 50-year-old men to even younger guys coming in … What it all comes down to is vanity.”

An alternative to Botox is Nu Skin, which is also becoming a popular anti-aging treatment amongst men.

Using advanced ingredient technologies, the product boasts it provides the same effects of Botox but without the pain.

Nu Skin representative Andreis Lathorous says that men today are just as conscious about their appearance as women.

“Everyone is conscious about aging, irrespective of gender and that’s why products like this are popular with men…they probably just won’t outwardly admit it,” he says.

“It’s slowly becoming more acceptable for men to care about the way they look and I think that is a positive thing.”