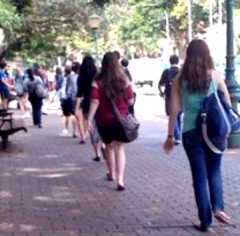 QUT offers students a service that provides advice on renting.

A Brisbane City Council raid that caught 37 students living in a single rental property has provoked other students to express their personal renting struggles.

The house contained mostly overseas students who had set up backyard portaloos and makeshift bedrooms in the garage.

Education postgraduate student at Queensland University of Technology (QUT) Lauren Brown moved out of her parent’s house at the start of this year.

She says she would never live in a rental home with 36 other people.

“Surely there must be another option – you can’t live like that,” she said.

“Overseas students come here and probably have little income, so you can see why the situation has come about.”

Ms Brown says this year she has been under financial stress.

“Trying to work enough hours to pay for rent, food and other expenses, plus full time study – it can all become very challenging,” she said.

She says her casual job restricted her hours due to the global financial crisis.

“Some days I can’t afford to eat.

“I’m lucky because I have the support of mum and dad and during the tough weeks I’ve found myself living at their place.”

Year 12 student Ryan Clarke has applied to study Engineering at University of Queensland (UQ) next year.

He lives with his parents at Morayfield on Brisbane’s northside.

Mr Clarke says he is hoping to live at one of the colleges at St Lucia, but is unsure whether he will be selected.

“My parents are worried I won’t have a place to stay by next year,” he said.

“I don’t have my driver’s licence and public transport from my home to St Lucia can take over two hours.”

Mr Clarke says his parents have considered moving into the city because renting is too expensive for one person.

“I don’t want to rent in share accommodation and certainly wouldn’t crash in a house with 37 people – that’s ridiculous,” he said.

Film student at Griffith University Alex Stewart and his girlfriend are renting a unit at Auchenflower. 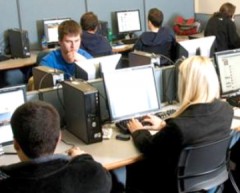 “I feel really terrible for those 37 students because they must have been pretty desperate,” he said.

“It also makes me angry because it gives students a negative reputation on the renting scene.

“Landlords are already cynical about having us living in rental homes.”

He says all expenses are split between him and his girlfriend.

“My parents live interstate in a small, rural town and don’t have enough money to help support me,” he said.

“I’m always tired and I feel it’s taking a toll on my education.”

Johanna Hirvela is the customer service coordinator of Unilodge, which provides accommodation for international students at $1,050 per month for a single studio.

“Most of our students are Asian and they rarely cause problems because they’re here to study,” she said.

“People are negative towards Australian students renting their home because they are rowdy and like to party.

“I don’t believe those 37 people were international students – they can afford better conditions because generally it’s their parents who pay for their education.” 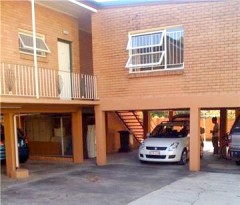 A unit block in West End for $295 a week, which Ms Pocuca says is affordable for some students.

“We get a range of tenants and have dealt with many students,” she said.

“You can’t generalise tenants or students.

“We have perfect students, but we also we have students who are untidy, too noisy and hard to deal with, yet this can be found among any group.”

Ms Pocuca says it is common for students to have more people living in a rental home than what is written on the lease agreement.

“We’ve never seen over 10 people in the one home,” she said.