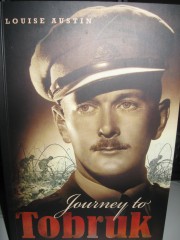 Mr Murray, who died in January, advised Ms Austin to take her time and “get it right” rather than rush to finish it before he died.

“John Murray was strong, upstanding and effective – a man with integrity and great honour,” she said.

“He said to me that he would answer any question that I asked him, which I thought was a very brave and courageous thing to do.

“We had many, many tears together while he was talking about his experiences.”

Ms Austin said Journey to Tobruk took five years to write and is based on “over 80 letters” exchanged between Mr Murray and his mother between 1931 and 1960.

“[The book] is a legacy for my children and my children’s children,” he said.

He said he learnt a lot about his father from the book.

“It’s a strange feeling when you read something about your father,” he said.

“You ask yourself, wow, did he get up to that?”

Mr Murray Jr said Journey to Tobruk had also made him “even more aware” of the countless untold stories of elderly people in our community.