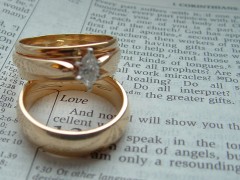 Gay rights demonstrators have been accused of mocking the institution of marriage by staging rallies and fake weddings in Brisbane.

Family First Australia candidate Linda Rose said marriage was an act only between men and women and fake ceremonies were offensive to the public.

“They have a right to their own beliefs and protest but when you turn on your TV and see them mocking marriage in that way it’s not nice, it undermines the institution,” she said.

“The protests and ceremonies were held to raise awareness of current discrimination in Australian legislation,” said Ms Payne.

“In the 21 century the Government must address gay marriage as an important issue and equal social right.”

Ms Rose said the current legal state of marriage was important for the sake of family and although same-sex couples deserve equal rights, the institution of marriage was strictly between heterosexual couples.

“We do not want to arouse hate for people’s beliefs, but when it comes to federal legislation it is our belief that marriage is an institution that is only between a man and a woman for the well being of the family unit,” she said.