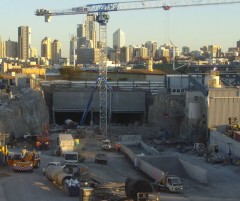 Brisbane Mayor Campbell Newman has announced the council will build a tunnel linking the western suburbs with the inner city.

The new Northern Link tunnel is part of Brisbane’s TransApex network of four tunnels and a bridge.

The tunnel will connect the Western Freeway at Toowong to Brisbane’s Inner City Bypass (ICB) at Herston.

The council has already commenced work on the North-South tunnel and the Airport Link tunnel.

But unlike the first two tunnels, the new Northern Link will not be a public-private partnership.

Councillor Newman said the Queensland Government has approved funding and Brisbane City Council will begin excavation by the end of next year.

He said the 4.7 km tunnel will cost $1.7 billion at current estimates.

The Federal Government will fund half a billion as part of a 2007 federal election promise and the council hopes to get an additional $300 million in commonwealth funding.

That will still leave Brisbane ratepayers with a bill of almost a billion dollars.

Councillor Newman said the tunnel presents a “compelling case” to solve the traffic problems of getting from the west of Brisbane to the north.

According to the TransApex report, the Northern Link will free up the congested arterial road network from “unnecessary cross-city traffic”.

“Brisbane people want a council that delivers more projects such as Northern Link and the Hale Street Bridge – they want solutions,” he said.

But not everyone is happy about the council’s latest set of solutions.

Town planner and Greens activist Tristan Peach said there will be many adverse local impacts.

“This [project] sends the message to governments that it is acceptable to build road tunnels at a time when reducing greenhouse emissions and usage of scarce oil resources are global priorities,”  he said.

“We know the Northern Link is going nowhere”, he said.

Councillor Newman expects the tunnel to be built by 2014.