If the Knights beat the second-ranked Bulldogs or the Eels defeat minor premiers St George, a loss to the Titans at Skilled Park would eliminate the Broncos from the competition. 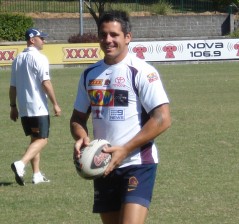 Parker says there will be no second chances for the Broncos if they lose at Skilled Park: Jessica Best.

“It only takes one team below us to knock off one of the top teams and if we lose we’re out,” Parker says.

“Certainly that’s in our mind and we don’t want to be sitting over the weekend waiting on results.”

Brisbane is tipped to win the local derby, but Parker is not so sure.

“They’re a side that’s finished third and rightly so, they’ve played consistently well all year so for us to be favourites it certainly does surprise us,” he said.

“In a one team town like Brisbane, it’s certainly a big responsibility being a Bronco,” Thaiday said.

“Every time we take the field the Broncos fans expect us to win.”

Broncos supporter Tim Jones has not missed a home game this season and will head down the coast this weekend to support his team.

“I’d love to see the Broncs thrash the Titans, they’ve really turned around from the start of the season and deserve a shot at the title,” he said.

The Skilled Park showdown will take place in front of a packed house with all tickets to the game now sold out.