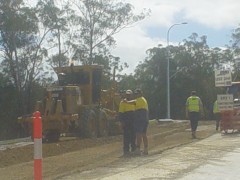 Road upgrades have been an employment haven for the people of Ipswich: Martin Cambridge

Ipswich has recorded a greater than expected job increase over the past two years, according to a Bankwest study.

Ipswich has had a job growth of 10 per cent since 2007, compared with a national growth of just 0.1 per cent.

Mayor of Ipswich Paul Pisasle said the figures were fantastic for the people in the area.

“The survey has come out and shows that Ipswich is fourth in Australia and number one in Queensland [in job growth],” he said.

“At the end of the day the most important thing you can give people is a job and that’s why I’m dedicated to creating jobs for the people of Ipswich.”

Councillor Pisasle said he was confident Ipswich would not be affected by the global financial crisis.

“Everytime they [politicians] talked about the crisis I kept talking about the positive things,” he said.

“What you can do is make it locally positive and get a big, strong reaction as Ipswich has proven.”

Chris Eves, professor in property economics at the Queensland University of Technology, said the employment figures coincide with a housing boom in the area.

“It comes down to the basics of urban land development,” he said.

“Out at Ipswich at the moment it is so much cheaper for industrial land and housing.

“The initial start-up cost is so much less that it’s attracting both population and business to the area.”

Professor Eves said Ipswich has the facilities to make it the leading regional centre in Queensland.

“The potential for Ipswich is a lot higher for future growth, particularly because it is well serviced by both road and rail,” he said.

The Bankwest study identified the Sunshine Coast as one of the worst performers in Queensland, with a decrease of 7 per cent in their employment figures.