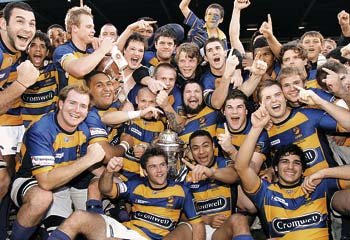 Easts are hoping for the same result as last year; a premiership: Sarah Owens

Easts Tigers produced a dazzling win over the Gold Coast Breakers in the Queensland Premier Rugby minor semi-final on the weekend.

A massive defensive effort saw the Tigers storm past the Breakers with a 41-10 win in Sunday’s game at Ballymore.

Despite being racked by numerous injuries over the season, Easts coach Pat Richards said the team was keen to relive the magic of their 2008 premiership win.

“We’re a different team from last year, we’ve got a few new young blokes. Today was a test to see who’d turn up,” Mr Richards said.

“[Today] they proved they have what it takes to take us all the way.

“We just dominated in the lineouts and scrums,” he said.

Centre David Skelton started the Tigers’ domination of the game, scoring the first of five tries at the seven minute mark.

Flyhalf Andrew Krelle had a perfect kicking day, not missing a goal and personally producing 16 points.

The Tigers’ cheer squad was out in force, with senior player Troy Williamson leading the pack.

“We got them home last year with our energy and spirit and we plan on doing the same this year,” he said.

The Tigers now face Brothers in the preliminary final this Sunday, where the loser will be eliminated and the winner will advance to the grand final a week later to meet Souths.

Easts forward Pat Ritche, who played in last year’s grand final, said that at finals time, anything can happen.

“Brothers have beaten us both times we’ve played them [during the] season but we’re hoping with our experience from last year’s finals we can produce something great on the day,” he said.

Easts and Brothers play on Sunday at Ballymore.  Kick-off is at 3pm AEST.