Improved education for kids with disabilities ‘a must’ 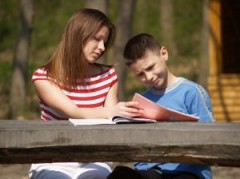 A Brisbane disability advocate has issued a plea for an overhaul of education services for children with disabilities in Queensland.

Felicity Maddison from Carers Queensland says many children’s special needs are not being met because of inadequate resources in special and mainstream schools.

She says this can make their learning difficulties worse and often resulted in behavioural problems.

“They get bored, just like any other child would,” she says.

“A lot of parents end up home schooling.”

“They must be given the time and opportunity to acquire the skills they need,” she says.

“But there just aren’t sufficient supports.”

Nardia Miller says she found it “very challenging” to enroll her autistic son Thaddeus, 16, in a school when she and her family moved to Queensland from New South Wales in 2007.

Ms Miller had to fill out “reams of paperwork” to apply to have her son enrolled in a Queensland special school, even though he had attended a special school in NSW.

“There are no national standards and there’s no interstate recognition.”

Thaddeus’s application was initially rejected and Ms Miller was told to take him to a mainstream school.

But Ms Miller says it was clear his needs would not be met by the mainstream system.

After submitting new application papers, Thaddeus was placed in a special school.

“He started school eight weeks behind the other students,” she says.

“It was very stressful for him.”

Ms Miller says special schools struggle to cater to the wide spectrum of disabilities of their students.

“They’ve got a hundred kids and every single child has different needs,” she says.

“You feel guilty about failing your child when you can’t supply everything that they need.”

President of Queensland Parents for People with a Disability Phil Tomkinson says his organisation receives a large volume of complaints about the education system every year.

“Complaints from people with disabilities and their families against Education Queensland outweigh complaints against all other organisations combined,” he says.

Mr Tomkinson says the complaints are mainly about discrimination and the quality of education.

He says improving education for children with special needs is a matter of “will and skill” and not necessarily just about money.

“A lot could be achieved through things like peer support and volunteers from the community,” he says.

“Don’t wait for the money, because it might never come.”