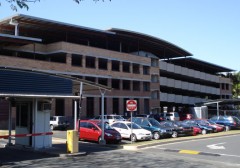 The University of Queensland announced plans this week to offset the environmental impact of parking on campus by installing solar panels on  car park roofs.

The plan involves installing up to 500 solar panels on the roofs of UQ’s two main parking structures which cover almost 7,600 square meters.

The solar panels will be capable of generating up to 88 kilowatts of clean energy to offset the impact of carbon emissions involved with parking and driving to the university.

UQ traffic and parking manager Anthony Fletcher said it was the university’s environmental responsibility to attempt to mitigate the carbon impact involved with parking on the campus.

“The actual running of a parking structure uses large volumes of electricity, mostly because of statutory lighting requirements,” he said.

“We hope to offset the power that is used in parking on campus, and hope to make a contribution on top of that towards carbon mitigation.”

“The panels will be installed over the next three to five years with future plans to install more panels on other campus car parks,” he said.

Mr Fletcher said UQ hopes to involve engineering students in various stages of the project, including the design of light weight roofing structures to allow future fitting of solar panels to some of the university’s uncovered car parks.